German Energy Protesters: ‘Without Russian Gas, Our Economy Will be Dead!’ 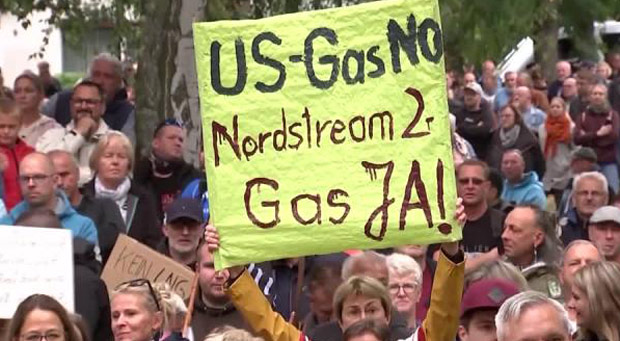 The night before the Nord Stream pipeline was damaged, thousands of German energy protesters flooded the streets against Socialist Olaf Scholz’s green policy, soaring energy, gas prices and the closure of the Nord Stream 2 pipeline.

The protesters called for an end to sanctions on Russia and the reopening of the Nord Stream 2 gas pipeline.

As The Nation reported:

“Open Nord Stream 2,” read one placard, “The government must go”, read another. “When someone turns off a gas tap, turns off the heating, these are not normal conditions and they can’t be.

Germany is one of the richest countries in the world and then something like that is just not possible,” said protest organizer Martin Klein. Lubmin is the city where the Nord Stream 2 pipeline lands in Germany.

One of the banners read: “We’re all in the same boat. Without Russian gas, our economy will be dead!”

Recently, German Economy Minister Robert Habeck visited Lubmin, stating that he didn’t see “a scenario, or no foreseeable scenario where Nord Stream 2 would play a role for Germany’s energy security.”

The protest took place on the second day of a two-day trip to the Gulf region by German Chancellor Olaf Scholz in order to intensify energy cooperation and secure independence from Russia.

In June, the CIA issued a vague warning that the two Nord Stream gas pipelines could be targeted for an attack.

American officials said that while it appeared likely that the damage to the pipelines was the result of sabotage, they had reached no conclusion about who might have been responsible.

European officials reported that both pipelines suffered a sudden loss of pressure and released gas into the sea, and the chances that both suffered accidents nearly simultaneously seem low,’ the outlet reported.

A Fox News host Tucker Carlson recently suggested, there seems to be growing reasons to suspect the attack on the pipeline was carried out by the Biden administration.

But it’s not just Carlson who has his suspicions.

As The Asia Times notes, if there was substantial fear in Washington that Europe might break consensus on sanctioning Russian over the Ukraine war to save itself from an energy crisis this winter, then there could be logic in such a move – but also huge political, strategic and security risks.

The US has become an important energy player sending LNG to Europe in ever-increasing quantities. Europe has been using US-supplied LNG to help fill its storage tanks for the coming winter.