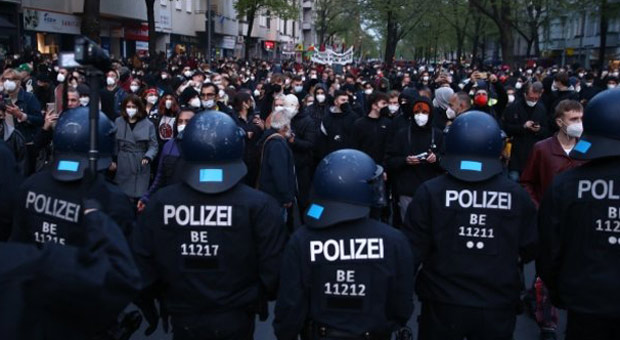 Police in Berlin, Germany, are drawing up emergency plans for a possible energy grid collapse this winter.

Authorities are anticipating rioting and looting this winter because citizens will not be able to heat their homes due to soaring gas prices and energy rationing.

The Daily Fetched reported in August that German officials warned that riots resulting from gas shortages would make anti-lockdown protests look like a “children’s birthday party.”

Gas shortages in Germany have come from Russia’s war in Ukraine and long-term mismanagement by the government.

“The shortage would likely prompt mass riots that will make previous anti-lockdown demos look like a “children’s birthday party,” an official warned at the time.

Ministers in Germany also fear the political right will suddenly gain significant traction because of the unrest as a result of the energy grid collapse.

The President of the Thuringian Office for the Protection of the Constitution warned in an interview with the state-owned broadcaster ZDF that mass violence was now looking likely.

Die Welt now reports that law enforcement in the country’s capital is preparing for various levels of social unrest because of the energy crisis.

Meanwhile, different preparations have been made to help police deal with massive public backlash resulting from soaring energy prices and energy rationing.

Contingency plans have also been established to deal with the entire energy grid in the city collapsing, which would cause mass rioting.

Police are also attempting to source emergency generators to power their operations, including satellite phones for communication during blackouts.

Germany was recently left in chaos after Moscow’s decision to largely stop supplying the European market following the Russo-Western sanctions war over Ukraine.

Despite the country veering towards the cliff edge, senior politicians are still reluctant to U-turn on the green agenda policies, which are responsible for the energy crisis in the first place.

As we reported earlier, Germany’s climate minister, Robert Habeck, blamed poor leadership, the state of the country’s energy, and its dependence on Russia.

Because Germany lacks natural gas, it will struggle to keep itself supplied over winter.