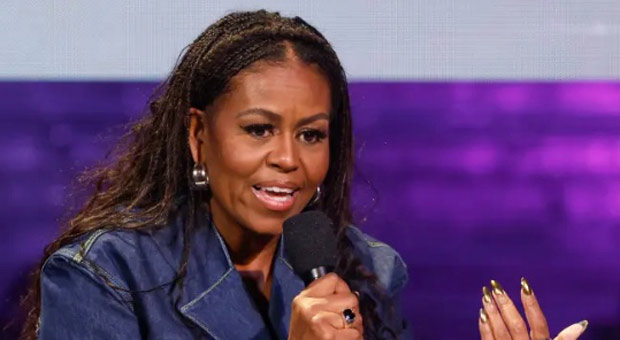 Michelle claimed she was so concerned about racism while serving as First Lady she changed her hairdo.

“As black women, we deal with it, the whole thing about do you show up with your natural hair,” Obama said during an event with Hollywood celebrity Ellen DeGeneres this week.

“As first lady, I did not wear braids. Being the first … yeah, we had to ease up on the people. Cause I thought about it,” she said.

“I was like, it would be easier. Nope, nope. They’re not ready,” Obama added.

Michelle was concerned that braided hair would block her husband’s healthcare reform bill from passing.

This is not to say there are no historical instances of racial discrimination against hairstyle choice, but claiming a hairdo could have prevented Obamacare from being forced on the public is a bit of a stretch.

Obama’s ignorance was eclipsed by her claim that the worst thing about her husband’s time in office was when he chose to wear a tan suit.

The first lady claimed criticism from conservatives of the suit proved having her hair in braids would be a bad move.

“The great indignity, the scandal of the Obama administration,” she said of the incident.

Earlier this week, Michelle Obama said she struggled with a “crushing sense of hopelessness” after the 2020 presidential election.

Couldn’t care less about your hair. You may be obsessed, but I’ve never met anyone that is. About time you stopped focusing on yourself.

It’s about time that somebody tear it’s clothes off in public for some serious, “Fact checking”.

does anyone care what Michael Obama says

Lady? In which way? Maybe she’s insinuating that Candace Owens was on her way to the White House? Or Mike is trying to suggest he’s actually a biological woman? Im confused.

Yeah, it was the hair holding you back. In the mean time, a Black POTUS was elected – twice!

It wasn’t the braids, it was the crotch bulge.

I don’t like Michelle Obama but her hair has absolutely nothing to do with it.

Most Americans of every race are too busy living their best lives to waste their time on hair type or style. Michele has nothing better to do with her useless life than dream up stupid ideas and try to present them as something profound.

Nasty lady, for certain. Everything is race to her. It gives her some mystic “power”. I suppose. She can take a hike off a short pier, as far as I care. Maybe she can take Barack with her.

Former Trump Allies Who have Turned against Him since Announcing 2024 Run
Some high-profile Republicans and onetime allies of former president Donald Trump have revealed their...
No posts found
wpDiscuz
12
0
What are your thoughts? Click to commentx
()
x
| Reply