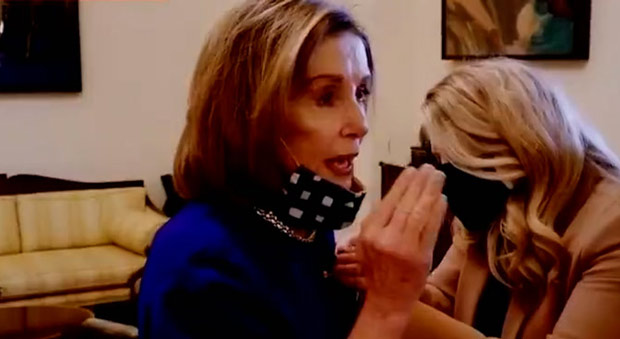 Unearthed Jan 6 footage of House Speaker Nancy Pelosi threatening to “punch [President Donald Trump] out” if he trespassed on the Capitol grounds, is making the rounds on social media.

During the 26-second clip, a state official informs Pelosi, “the secret service said they have dissuaded [Trump] from coming to Capitol Hill, they told him they don’t have the resources to protect him here, so at the moment, he is not coming, but that could change.”

“This is my moment. I’ve been waiting for this—for trespassing on the Capitol grounds,” Pelosi snaps.

The House Speaker then says she is prepared to “go to jail” for the act.

The clip was shown on CNN on Thursday and obtained by Pelosi’s daughter Alexandra.

The footage also shows Pelosi watching Trump’s speech at the Save America Rally on Jan 6, 2021.

Members of the panel, which held what was expected to be its final hearing before the midterm elections Thursday, had previously said that they were still considering seeking an interview with Trump or former Vice President Mike Pence.

Earlier this year, Pelosi was accused by Republican lawmakers of concealing information about her culpability in the security breakdown during the Jan 6 riot.

Rep. Rodney Davis of Illinois accused the speaker of stonewalling.

“The Sergeant at Arms, at the direction of the speaker, has refused to provide us their communications surrounding Jan 6. I believe those records will show there was a lot of communications and coordination between the speaker’s office and law enforcement officials leading up to and on Jan 6,” Mr. Davis wrote in a statement.

As The Federalist writes, Pelosi ignored the possibility of unrest, which was chalked up to an intelligence failure, and even predicted by Capitol Hill parking attendants.

“Due to the possibility of large-scale public protests, access to the Capitol plaza will be restricted,” read an email from the House Parking Team on the eve of the riot. “For the safety and security of personnel on the House campus, we ask that staff strongly consider parking in the Cannon and Longworth House Underground Garages.”

Pelosi even condemned Trump’s suggestion of the presence of federal troops in the nation’s capital.