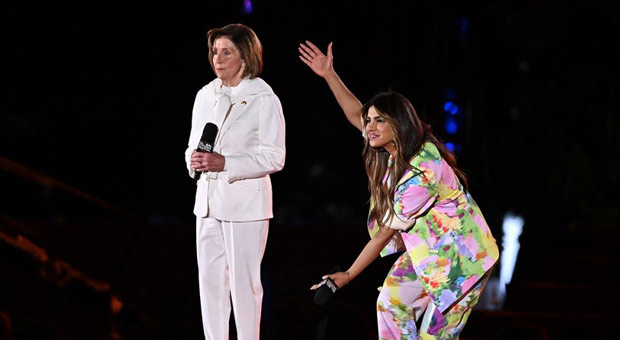 House Speaker Nancy Pelosi received a less than warm welcome during an appearance at the Global Citizen Festival in New York on Saturday.

The 82-year-old house speaker was introduced on stage by Indian actress Priyanka Chopra Jonas, but the reaction was underwhelming at best.

Pelosi was in New York’s Central Park with her husband Paul, who Paul was arrested in Napa Valley earlier this year after crashing Porsche following a boozy dinner.

Unsurprisingly, Pelosi used the appearance to set out plans heading for Congress to tackle climate change issues. Still, the audience wasn’t impressed and could be heard booing as she expounded on “carbon pollution.”

“It’s thanks to your help that the United States recently enacted historic climate legislation, which will be a game changer,” Pelosi said as boos echoed throughout the festival, The New York Post reported.

RELATED: Adam Schiff: Pelosi Is the ‘Most Impressive, Incredible Speaker in Our History’

“It will slash carbon pollution by 40 percent by 2030, it will give a historic, an historic $370 billion to fight the climate crisis,” Pelosi said.

Members of the crowd could also be heard yelling “let’s go!” as they became frustrated with left-wing politics being forced on them in what was meant to be a music festival.

Despite the unimpressed crowd, Pelosi continued her speech, saying the bill would result in “better water and air for our children” and “better-paying jobs and lower energy bills for their parents.”

The House Speaker could also be heard calling for “better water and air for our children” and “better-paying jobs and lower energy bills for their parents.”

Appearing as though Pelosi understood the crowds’ cold reaction to her, she agreed to keep her remarks short.

The event was one of the first public outings for the Pelosis since her husband was sentenced last month to three days in a California jail for crashing his Porsche while over-the- limit.

To bad they didn’t do what they have been doing to everybody there murder.

A truly wicked person. So caught up in her megalomania and elite bubble she doesn’t even have the slightest concept of reality.

Where was anteefless when we needed them.

The best part of the video is the idiot off camera asking “why’s everyone booing?” LOL!

One of the most wicked and evil woman that ever served in congress!!!!!!!

Word is the Fbistapo is using facial recognition tech to identify people to add to their raid list.

Germany Bans Farmers from Fertilising Own Land to Serve EU 'Green Agenda'
Farmers in Germany have been banned from properly fertilizing large areas of their land under strict...
No posts found
wpDiscuz
8
0
What are your thoughts? Click to commentx
()
x
| Reply