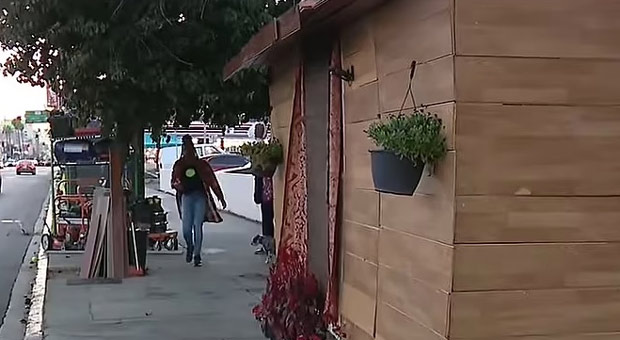 A homeless man in Los Angeles, California, has shunned the Democrat-run city’s temporary housing offer, opting to build his own functioning home, complete with an electricity and flower garden.

The man, only identified as ‘Q,’ built the shed on the city’s sidewalk using old planks of wood from construction sites because the temporary housing options are like “concentration camps.”

The makeshift home stands on car batteries and is decorated by plants on its exterior. The man says the shed is an upgrade from his previous living.

Hollywood Boulevard and Venice Beach have become littered with makeshift structures, rusting RVs, and sagging tents, which are common among Democrat-run cities.

The homeless man has been taking shelter inside his sidewalk shed for a few months now, saying the home ’empowers’ him.

“There’s probably better places than this, but I don’t think I’m bothering anyone here,” he said.

But local’s response to the man’s home has been somewhat mixed; while some show empathy toward him, others complain about his unwarranted residence.

“I don’t like it, it’s not good,” one woman complained.

One man, Rance Shaw, who works at City Vibes Coffee across the street from the home, says the shed doesn’t bother him.

“He hasn’t bothered anyone, and honestly, I’m glad that it’s right there because I feel safer with him there. For some reason – I don’t know why – it feels like he knows what he’s doing, and he’s not here to hurt anyone,” Rance said.

Another man added, “It is a little weird out there, but he is safe, and he doesn’t have to worry about someone burning his tent down.”

The homeless man, who is a former Army veteran, describes himself as ‘self-employed’ as he fixes bikes for locals, but says his goal is to become a mechanical engineer and start his own business.

The man’s decision to build the home has caused confrontations with the city’s sanitation workers, who are trying to move him on.

The city’s rampant crime-ridden state has prompted many locals, including celebrities, to flee to places like Texas, which is Republican-run.

As a result of the worsening problem of crime and homelessness, the city is experiencing its first population decline in decades, with around 250,000 residents fleeing the city.

Mayoral candidate Rick Caruso, who is running against Democrat Karen Bass in the November election, has campaigned on the issue of homelessness and bringing an end to a steady stream of ‘career politicians like George Soros-funded DA George Gascon, whose soft crime policies have all but destroyed the city.

“It’s incredible what all of our elected officials have allowed to happen. We’re allowing people to live and die in the streets in their own waste. And then we allow that to happen in front of one of the great companies of Hollywood,” Caruso added.

It happens in front of the great companies of Hollywood.
Where do you even begin with that statement?
What you see is the PRODUCT, of those great hollywood companies. This is what they have produced, now it is nesting on their front lawn. Be Proud Ca, Be PROUD of your creation.

The homeless vet. For all the altruism and care the liberals claim to have for their fellow man, why don’t one of the colleges give him a full tuition, room and board gets him off the streets, let him get his engineering degree, and then start his own business. Think of the PR that could be for that college, how much they genuinely CARE for the human condition…. ROFL who am I kidding, they don’t give a fiddlers fk, all they see is cash.

let that place rot into the diseased sewer it is, Build a wall around it and let it B**n to the ground to sterilize the pestilence that is there.

I think it is a great idea to help this veteran who put his life on the line for us. It is now our turn to help him. There are enough rich Vets who could step up to the plate here, but will they?? probably not!! These veterans need our help not our disgust of them. Help him, he will help another and a movement is started/ God Bless him and all our veterans.

How do you know this veteran put his life on the line for us? He may have worked in the kitchen, or was enlisted during peacetime not war.

LA will be overrun with shanty towns like Capetown, Rio de Janaro, Some of the mega cities in Africa, South and Central America, South Asia, and Asia.
The shantytowns often are run by criminal gangs, cartels, human kidnapping and trafficking rings, and the central government has no control or even presence after dark.