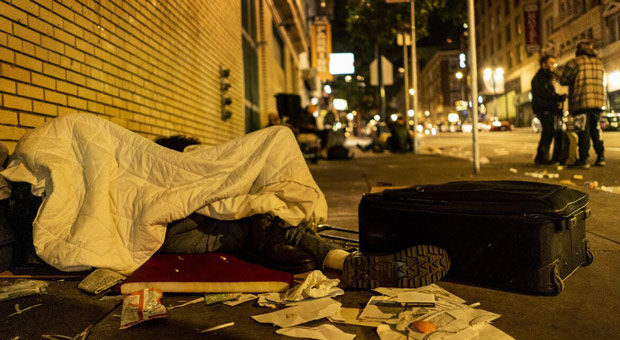 Davis Smith, the founder of popular clothing and gear outfitter Cotopaxi, announced he is closing his San Francisco store because the area has “descended into a city of chaos.”

Smith cited robberies, constant vandalism, and fears for the safety of his employees for his decision to shutter the store he opened “in a charming shopping district” a year ago.

Smith said that the Democrat-run city’s refusal to do anything about theft and safety makes it impossible to run the business.

“Our team is terrified,” Smith wrote on LinkedIn.

“It’s impossible for a retail store to operate in these circumstances, especially when cities refuse to take any action (despite us paying taxes well above any other state we operate in),” Smith continued.

“As of today, we are closing the store due to rampant organized theft and lack of safety for our team,” Smith wrote.

“Our store is hit by organized theft rings several times per week. They brazenly enter the store and grab thousands of dollars of product and walk out,” he added.

Following the city’s decision to reduce the penalty for shoplifting under $950 worth of goods amid the surge of homelessness and crime, many businesses are closing their stores and going elsewhere.

There are now countless videos across social media showing shoplifters emptying store shelves into garbage bags and walking out with security guards and police powerless to do anything.

Here are a few examples – Watch:

Cotopaxi, founded in 2014, has faced unprecedented crimes since opening up its San Francisco store.

During the store’s first week, thieves smashed its windows and looted it.

Smith said he resorted to putting plywood on the windows after replacing them four times.

That’s the plan, to force people out and then buy their property for pennies on the dollar.

Geographically, California is very desirable; with the mountains, ocean, climate and even the architectural infrastructure. Perhaps in 100 years, after multiple generational changes in political ideologies, it may once again be habitable.

Surprise! Surprise! What did the defunders of police expect? Send in some psychologists to police things……..should make it all better.

Mike in a Truck

This is what Bolsheviks do. Allow rampant crime. Empty prisons in order to terrify citizens. At some point citizens beg for relief and give up freedom for safety. They end up as slaves. The good thing is there will order- dictators hate disorder.

Dissociate
Reply to  Mike in a Truck

There was no alternate internet news back in the Bolsheviks days. Just MSM lies lets say. People also did not have millions of firearms and billions of bullets. The Bolshevik types we see today will be nothing more than targets if we the people begin to go mad.

Seeking reasonable reform of the justice and penal systems is one thing.

The Democratic Party endorses these policies.

Assuming that Cotopaxi’s founder and the majority of his employee’s support the Democrats, they are simply being served their “woke” just deserts.

It is… immoral to claim virtue without fully living with its direct consequences. – Nassim Nicholas Taleb

I’m happy to say California is reaping it’s just rewards. I can’t think of a more deserving city, than the one that thrust Nancy Pelosi (and Gavin Newsome) upon us all. Here’s to laughing at your stupidity!

Thinking if the mafia was around it’d not be an issue, sure you are paying for protection, but you are also getting that protection.

In a few years there is not going to be any more easy pickings for these dirt bags, everyone will have left or gone out of business. They are going to be in for a rude awakening when they go into a normal place and try that c**p and finally eat lead.

Germany Bans Farmers from Fertilising Own Land to Serve EU 'Green Agenda'
Farmers in Germany have been banned from properly fertilizing large areas of their land under strict...
No posts found
wpDiscuz
9
0
What are your thoughts? Click to commentx
()
x
| Reply