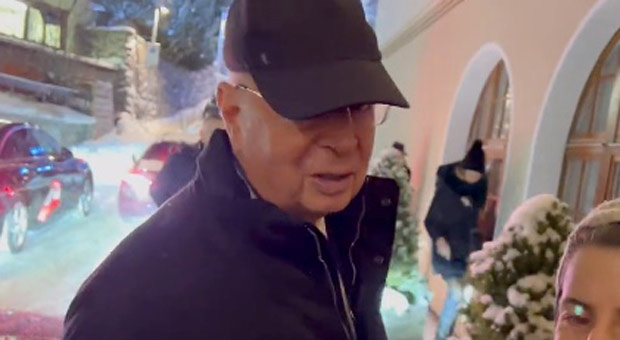 The World Economic Forum’s 2023 event is not just extremely tight on security, but also media if Klaus Schwab’s response to an independent journalist is anything to go by.

Of course, for an event filled with unelected bureaucrats dictating the direction of the world into a digital dystopian nightmare, any opposing views would be a big no-no.

During the encounter, as shown in the video, Ganaha asks Schwab if she can ask him a question. He stops, acknowledges her, and then begins to walk away.

Ganaha persists as Schwab walks off, asking, “can I just walk with you and ask questions?”

A few seconds later, Schwab stops, turns back to the journalist, and asks, “Which media are you with?”

Ganaha responds, “I am an independent journalist…”

Before Ganaha can even finish her sentence, Schwab snaps, “NO THANK YOU,” before scuttling off with his entourage to clamber into a big back SUVs.

Another example of disdain the WEF has against independent media came when journalist Jack Posobiec was briefly detained and thrown out of Davos by a police force sporting World Economic Forum logos.

Reuters fact-checked the incident later, claiming the WEF doesn’t have its own police force, but they only wear WEF badges while the event is going on. Oh Right…

Klaus is a kunt.

Klaus is a representative of h**l here to destroy whatever good he can find. He and the rest of those demonic people need to be stopped. The BEST thing each of us can do is to pray! Pray every day, all day long, for our world, for the children and all the pathetic lost people selling their souls for a few dollars/euros.