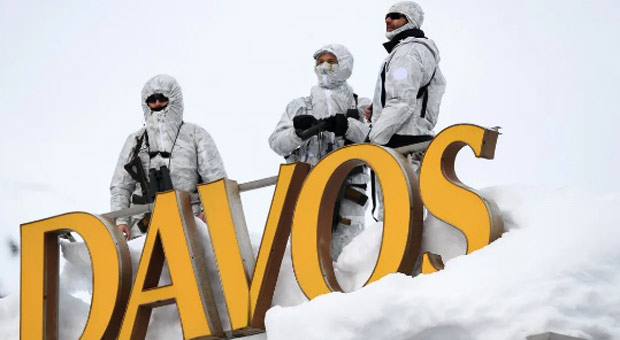 The soldiers from the Swiss army have been deployed to protect participants from harassment and dissenting voices.

The Swiss Defense Department (VBS) released a statement on January 6 confirming the Federal Assembly, the country’s parliament, had approved the deployment of the Swiss army, Blick reported.

As the world wakes up to Klaus Schwab and his WEF cronies, the event has now taken drastic measures to counter protests that are reportedly expected to occur after the conferencing opening.

Two requests for permission to demonstrate against the WEF have been submitted to the town of Davos, according to the town’s administrative officials.

As The Daily Fetched reported earlier this week, the WEF previewed its globalist agenda ranging from cryptocurrencies, racism, climate, AI, and even a major structural change to the internet.

Schwab will once more deliver “guidance” to his guests, controlling the entire world under the guise of “fixing” global problems.

This year’s meeting is headlined “Cooperation in a Fragmented World” and will follow from 2021’s “Great Reset.”

Davos will host globalist elites including 52 heads of state and government and nearly 600 CEOs for the event set in luxurious surroundings.

However, due to security reasons, forum president Borge Brende said some delegations requested that the names of their participants “not to be shared” right away, adding that unspecified “high-level” delegations from China and Ukraine would be in attendance.

Climate envoy John Kerry amongst other officials will represent the U.S.

Kemp, will join Democrat governors Gretchen Whitmer of Michigan and J.B. Pritzker of Illinois at the event. They will rub shoulders with Klaus Schwab, Bill Gates, the Soros clan, Larry Fink of BlackRock, Michael Bloomberg, United Nations Secretary General Antonio Guterres, an others.

Why do they need soldiers to protect them when Satan is!

Satan is just using them … wait till they find this out : )

Satan or the antichrist used Cuomo until he was done with him – now he is using Joe Biden and just about done with him. Once Lucifer finds you are no longer useful or optimal you get tossed aside like old rubbish

We can’t wait for Satan to get these people with too much money and no heart!

Won’t matter. They will soon be hunted everywhere they go.

They know people across the world despise them for what they’ve done (and are doing).

OK people, you want this to rule you? Then start by screaming at your rps in government to kick them out of your country.

I bet they have plenty of guns protecting Satan’s legions.

Sounds like a spot to catch a Kinzhal since they have put so much bait out.

The Swiss abstained from fighting the Nazis. Now they protect them with their own troops.

They certainly don’t protect their border, so at least they found a use for their cute little “army.”

If you recall, the Swiss were the only Europeans who flat out said NO to Syrian refugees. They said, “Thanks, but no thanks, here’s some money, go somewhere else, Danke. ” And all the Syrians went to Sweden.

100,000 Ukrainians since the US and NATO started its war, and still Syrian refugees are the largest group of asylum seekers and refugees in Switzerland.

Um, no, these aren’t NAZIS, GENIUS. These are BOLSHEVIKS, these are the people the NAZIS FOUGHT AGAINST.

How sad that you either don’t know this, or are paid to push your “Nazi” BS.

Bolsheviks, Nazis…..what’s the difference to the populace when both are totalitarianist governments?

Wow, wiping truthful comments right out, eh?
National Socialism is not a “totalitarian (no -ist) government”.
Not in any way, shape, or form like Bolshevism / Communism.
Bolshevism and Communism are both rooted in Talmudic Judaism. Which is Ba’al worship.
National Socialism was a “Christian” movement, but unlike what the propaganda masters (and gatekeepers here) fail to recognize, but wanting a “white German Germany” did NOT equate to “hatred for other races and ideologies”, unlike Bolshevism, which PERSECUTES CHRISTIANS, which PERSECUTES MUSLIMS, and which bs rags like THIS SITE SUPPORT when they censor truthful comments out of…what, malice? Hatred? Hubris? Ignorance?

If “National Socialists” were “racist” (a BS term if there ever was one), then why did they have Muslim divisions? Why were there even JEWS serving in Hitler’s army??? OOH, we can’t let any REAL HISTORY creep into the mix, can we???

Not all of us out here are ignorant of the truth, and your attempt to delete and censor the truth about history and about REALITY really makes me want to vomit.

And you’ll notice how the censors NEVER step in and refute anything I say, never say I’m wrong, never show how I’m incorrect…guess what…BECAUSE I’M NOT WRONG.

I look forward to the day that censoring or deleting a comment is a FELONY, punishable as such. How much truth will you hide then?

Both are Marxists, the Nazi’s were just the German flavor.

Really du.mb and dishonest comment. You’re framing this to imply two things to the layman reader… that 1) the Bolsheviks were the opposite of the Nazis (they weren’t…but there wasn’t room for two similar groups of tyrants to share Eastern Europe, so they were fighting for dominance), and 2), that the Bolsheviks were the good guys (hint…there’s not always a good side in every conflict, sometimes bad guys fight each other – and…the bolsheviks killed a heck of a lot more people than the Nazis). I suppose such nuanced concepts are a bit too deep for you.

The more accurate statement was the Nazis abstained from fighting the Swiss. One Swiss sniper in a mountain pass can hold off an entire army. And every man in Switzerland is armed and has served in the military. Hitler may have been foolish enough to invade Russia, but he knew better than to take on the well armed and well trained Swiss. They have that cool utility knife thingy too, which probably deterred him. That toothpick was the straw that broke the camel’s back of any Nazi thoughts of invasion.

The Swiss were neutral in WWII

If you call storing all the Nazi’s gold and stolen stuff neutral, I guess they were neutral.

I usually purchase my range targets at the gun shop. The Duchy of Grand Fenwick provides them for free.

Apparently, they know exactly how popular they are. Sounds like Washington D.C.

Fine point there, Daniel. Do you think they might employ any “fence walls” or guns against the masses as Frau Pelosi did in Jan of 2020?

HAHAHA. These b****ds are frightened little school girls. And they should be. It would be appropriate to repay them for what they have done to everyone on the entire planet!

Sometimes i wish I was a Hellfire missile Drone operator…

That would compare to going back in time and killing Hitlers Mom before he was born.

I thought the same thing. The sky is our friend.

Interesting… my original comment was removed. Like I said before… if any of these 5000 soldiers had a spine they would take this opportunity to do the world a favor and eliminate as many of these elitist scumbags as possible while the world still has a chance at freedom.

The Republican-led House of Representatives should issue a statement that John Kerry does not officially represent the United States at all. He holds no elected position, and the United States citizens should not be held responsible for anything Kerry says or does at DAVOS.

If leaders need an Army to protect themselves, they are not leaders but dictators. That will always fail long-term and lead to world wars. Be warned.

I challenge the “moderators” (thought police) to dare enter the comment section to explain why the WORD MUSLIM is censored? Is Jew censored? Is Christian censored?

Oh so the only people we can talk s**t on is Christians, right?

“Neutral” Switzerland sure does a lot to forward globalism and facilitate corrupted oligarchs.

The Swiss government is complicit as it gets.

Wonder if their drone defenses are up to date?

I wish I could describe the feelings that I have every time I hear the name Klaus Schwab and his W.E.F., and that when I do I am reminded that there is in this world one particularly wicked demoniac son-of-a-b***h who feels that he is so superior to the rest of mankind that he has personally authorized himself, alone, to be that one person to both rule the world and to tell this man how to live his life. But I am comforted by the knowledge that I am not alone and that I have millions of brothers and sisters in this world, people that I do not know, who will not submit to this tyranny and that these authoritarian demigods will not rule and reign in this world but will B**n in h**l for all eternity, and their names will be wiped from our memories.

By catering and hosting the WEF, the Swiss have abdicated their long running tradition of neutrality and are now in cahoots with the most ambitious villains on the planet. This should be concerning to all….

Amazing how the Swiss Gvt will use their men and women and put them in danger; I guess just like any ignorant Gvt around the world USING good men and women to do their dirty work!

Ever wondered why “they” need so many soldiers to protect them : )

They want to take YOUR guns away but they get lots of guns to protect THEM. See how that works? You will have nothing and like it

If you are this worried about your safety while making decisions for people that you were not voted to represent, you probably should stop what you are planning.

Harvard Abruptly Shuts Down 'Disinformation' Research Project Led by Hunter Biden Laptop Skeptic
Harvard’s Kennedy School of Government has pulled the plug on its “Disinformation”...
No posts found
wpDiscuz
49
0
What are your thoughts? Click to commentx
()
x
| Reply