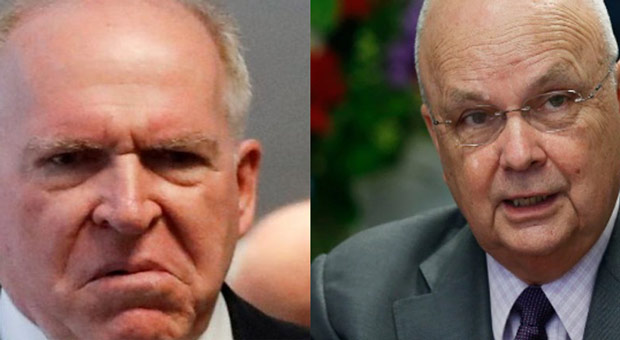 Former top intelligence officials who claimed the Hunter Biden laptop story was a disinformation campaign propagated by Russia in the weeks leading to the 2020 election have remained silent following the release of the explosive internal Twitter emails.

The emails showed undeniable evidence that Twitter officials took actions to suppress the story on the possibility the report contained hacked materials, despite there being no evidence or government findings of such.

Then-Twitter communications official Trenton Kennedy questioned the decision to suppress the story on the ‘hacked materials’ basis: “I’m struggling to understand the policy basis for marking this as unsafe,” he wrote.

RELATED: Trump Suggests 2020 Election Results Could Be Thrown Out after Twitter Scandal

Meanwhile, then-Vice President of Global Communications Brandon Borman asked, “Can we truthfully claim that this is part of the policy?”

Just days after the story was suppressed, over 50 former intelligence officials published an open letter on October 19, 2020, saying the story came from the Russian government.

“If we are right, this is Russia trying to influence how Americans vote in this election, and we believe strongly that Americans need to be aware of this,” they wrote.

The letter added to quash the explosive story, which had the potential to implicate then-Democratic presidential nominee Joe Biden.

The NY Post story revealed private emails of shady business dealings with foreign actors and compromising sexual material on Hunter Biden’s laptop, which he left in a Delaware repair shop.

“The real power here however is the number of former, working-level IC officers who want the American people to know that once again the Russians are interfering.”

The letter was also signed by former acting CIA Directors John McLaughlin and Michael Morell and over three dozen other former intelligence officials.

In September, The Daily Fetched reported that Michael Hayden argued it is “perfectly fine” to share disinformation as long as it protects the right people, like President Joe Biden.

Hayden said he had not “maintained much interest in the story,” New York Magazine reported.

“‘I’m not following it,’ he said, but he stood by the decision to sign and release a statement about a theory for which there was only circumstantial evidence,” Hayden said.

“I was perfectly fine with that,” Hayden added.

“It looked like disinformation. … It would be nice if we didn’t have to do anything or say anything, but the Russians were doing so much,” the forme CIA director continued.

They should ALL have their security clearances pulled… and tried for treason.

They remain silent because they can. But they know there will never be consequences for them from the DOJ no matter which party is in charge.

They didn’t even look or make any effort to corroborate it.
This was all knee j**k reaction, giving them the benefit of the doubt, but most likely, at least 60/40 probability, their minds were made up even before they read it.
so should their emails be subpoenaed, their phone records scrutinized to see if they have a Russia or China connection.
The recent election was effected by Chinese interference through TikTok.
Was this Chinese interference on the election?
There’s a good chance our intelligence agencies are compromised by the Chinese.
The Chinese eliminated many, perhaps dozens of CIA sources in China, jailing them or simply executing them at work in front of coworkers.
Actually what this scandal likely indicates is that these are the best people that American intelligence has and that they’re either dumb, politically compromised, or toeing the Chinese and/or Russian, even possibly Iranian line.
Certainly the Biden Administration indicated during the campaign, its intention to renew the Iranian Nuclear Deal, originally negotiated during the Obama administration, cancelled by the Trump administration, and in process of being re-negotiated by the Biden Administration, with the added incentive to lift Iranian sanctions on selling oil, to lower the price of gasoline.
Were these intelligence officials actually compromised through Ukraine, since there seems to be indications there was billions of dollars in money laundering going through Ukraine, and it’s difficult to tell where the money ended up. The FTX scandal indicates even more billions of dollars were going through Ukraine with hundreds of millions if not billions having disappeared without a trace.