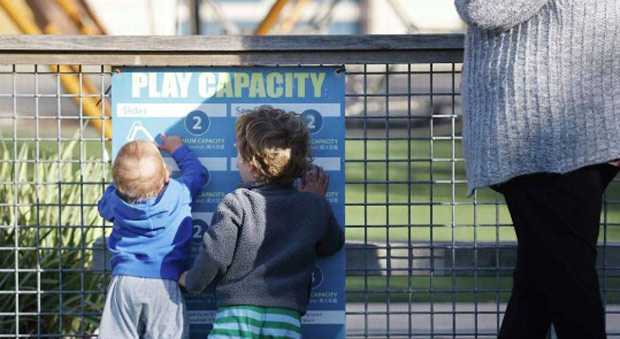 A 10-month-old baby suffered a cardiac arrest after overdosing on fentanyl while playing in a San Francisco park on Tuesday.

The baby is believed to have ingested traces of the drug, which had fallen on the ground in the play area.

Paramedics were called to Moscone Park in reposne to reports that a baby had trouble breathing and went into cardiac arrest, The San Francisco Chronicle reported.

After the baby was revived with Narcan, fentanyl was found in his system.

The baby’s father, Ivan Matkovic, said his son tended to put leaves into his mouth and played in the grass when he suffered a sudden and unanticipated medical emergency.

“Our baby went to the ER today (11/29/22) and barely survived, … because he found and ingested fentanyl while playing at Moscone Park (it’s the one next to Marina middle school).”

Local activist Michael Shellenberger, who opposes the city’s permissive drug policies, said
there is “a homeless drug scene in the baseball bleachers and dugout about 150 yards from where the poisoning occurred.”

The Chronicle could not confirm the whole medical record. Still, the outlet quoted San Francisco Supervisor Matt Dorsey saying that a child accidentally overdosing on fentanyl was not unprecedented.

Dorsey called the incident a “wake-up call” about the city’s drug crisis.

Last week, a puppy accidentally ingested prescription fentanyl while nosing through a garbage can.

Fentanyl overdose deaths are increasing, especially in states such as California.

Fentanyl overdose deaths skyrocketed 1,280% over the past five years in Los Angeles, according to a new study.

Among the deaths, the highest fell into adults aged 26 to 39 who live in affluent areas. This was followed by the age range of 40 to 64, according to the Los Angeles County Department of Public Health.

The study derived shocking figures from looking at emergency room visits, hospitalizations, and deaths broken down by age, gender, and ethnicity.

The report added that black residents were higher at 30%, compared to 22% for white residents, if ethnic groups were broken down compared to rates per 100,000 people.