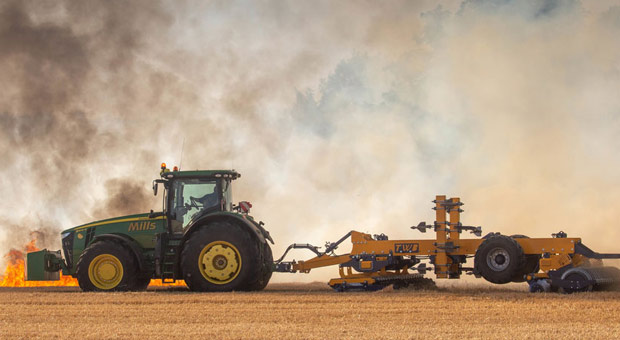 The state of the global food supply is only set to worsen, as U.S. agriculture faces very poor harvests due to droughts, supply chain issues, and the Ukraine war – just a few elements creating a ‘perfect storm’ for a worldwide food crisis.

The ongoing Russia/Ukraine conflict has cut off vital shipments needed to make fertilizer and grain products.

According to top-level executives from big agricultural firms, North and South America would need at least two more years of good harvests to ease supply pressures.

He explained that efforts to restock global crop supplies were in vain due to this year’s harvest falling below typical yields.

Aside from supply problems, the United States and South America have suffered massive drought this summer, adding to the building crisis.

Drought conditions worsened throughout the U.S. Grain Belt, with a massive harvest reduction due to lack of water.

Not only that, farmers in Northern California trying to tackle the water problem were told by the government to stop diverting water from a region dedicated to protecting fish.

THIS IS NOT A DRILL: 33 Things We Know about The Coming Food Shortages

As we reported in August:

In a letter to the water board – dated August 17, the agricultural group said it thought the exemptions permitted it to cut down its diversion of water by just 15%, stating it would begin using water for animals when the weather reaches high temperatures and to suppress fires.

In September, the Agriculture Department announced it had lowered the estimates of its nationwide corn production to 13.9 billion bushels.

In August, projections for soybean production were down 3 percent, down from last year.

According to the WSJ, wheat price futures at the Chicago Board of Trade soared 17 percent over the past 12 months.

Meanwhile, corn is up 28 percent, while soybeans jumped 14 percent.

But the July agreement between Russia and Ukraine, brokered by Turkey via the United Nations, eased crop prices slightly – allowing over a million tons of grain to be exported through the black sea from Ukraine.

Since the invasion of Ukraine in February, about 15 percent of grain stocks have been lost, the Ukraine Conflict Observatory noted.

Ukraine could only export about 40 percent of its normal grain shipments during that period before the Black Sea agreement, Juan Luciano, CEO of Archer Daniels Midland, said at a September investor conference.

Russian President Vladimir Putin accused the West of diverting Ukrainian grain to their own countries instead of allowing it to arrive in developing world countries.

Putin’s statement caused a jump in wheat prices, which had been declining since the deal.

“Contrary to Russian disinformation, this food is getting to Africa, the Middle East, and Asia,” said European Commission President Charles Michel at a U.N. conference.

According to various Russian officials, despite sanctions, items in the agreement that allowed Russia to sell its agricultural products were violated.

Now experts say fertilizer shipments are being disrupted due to the war and, as a result, are seriously affecting global harvests.

According to the U.N.’s Global Food Security Summit on rising food insecurity, we could be in a devastating crisis by 2024 if Russia’s war with Ukraine continues.

“As we’ve seen over the last years as a result of Covid, before that climate change and, more recently, conflict—notably Russia’s aggression against Ukraine—profound food insecurity touches well over 200 million people on this planet, including, of course, in Yemen,” said U.S. Secretary of State Antony Blinken.

Beasley said there was a real risk of “multiple famines” this year.

He added that 345 million people are facing starvation, with 70 million directly affected by disrupted shipments due to the war in Ukraine.

U.N. Secretary-General Antonio Guterres also warned that if the war with Ukraine does not stabilize in 2022, “we risk to have a real lack of food” by 2023.

As The Daily Fetched highlighted earlier this month, there is also an apparent coordinated attack on agriculture, which is becoming glaringly obvious.

The epidemic of food processing plants mysteriously burning to the ground is another bizzare factor adding to the “perfect storm.”

We noted some hard data points which make it impossible to deny what is coming – see the full list here.

And then they want you to eat bugs.

They yearn for the “good old days” of their Messiahs – Lenin and Stalin.
They intend to reprise the Holodomr. On a GLOBAL basis!

Is it an act of God, coincidence, or a coordinated attack on civilization Globally? The question should not be answerable with these two words climate change. However, it is the standard answer given to explain almost anything these days.

*Fires- when was the last time there were temperatures so hot that spontaneous combustion would occur in the hills or mountains and B**n for days? Rarely, is the perpetrator or facilitating agent reported. Most hills and mountains are dry in the summer season. The amount of dryness can vary. Nevertheless, dryness alone will not start a fire or multiple fires at the same time.

Tierenchal rain/flooding- Seasonal weather predictions are still not a perfect science. Nature can be unpredictable and when humans use science to manipulate the weather more than likely extreme weather events will be the result.

Farmers are being told by government health agents to destroy all the fouls on their farms because they might be infected with Bird flew. The food processing warehouse suddenly caught fire a few days later.

Before I end my comment, I’ll ask the question again., Is it an act of God, coincidence, or a coordinated attack on civilization Globally?

The reason is the green movement isn’t allowing farmers to grow food!
The Dutch farmers wanted to grow food, but the elite want the great reset which means a lot of people have to die.

Now, *how* did Bill foresee that he should buy up all that land for genetically modified crops? Genius? Prophet? Or just plain villainous plan? 🙂

I’ll bet your third choice is the correct one.

Unprecedented for sure but not unplanned by the folks that want world population decreased.

As chinajoe makes sure his chemise masters don’t suffer …. As he gets his 10% for “the big guy”

at least hunter is covered

This has been in the works since 2008 when a pro-Muslim, anti-American terrorist was elected as U.S. President. With promises of “free stuff,” (i.e. EBT cards, Obamaphones, Obamacare, etc) a great percentage of the public was successfully dumbed down/“stupified” enough to be controlled, and thus, re-elected this evil Divider in Chief who then completed 4 more years of destruction in America. He is now working behind the scenes of Puppet Joe and making sure that The Great Reset and NWO are next. Evil, planned, and 100% against God, America, and conservativism.

Nancy Pelosi Caught Out Over Mysterious 'Timing' of Her MASSIVE Stock Trade, DOJ Lawsuit
In the closing days of Nancy Pelosi’s reign as House speaker and weeks before an antitrust lawsuit...
No posts found
wpDiscuz
10
0
What are your thoughts? Click to commentx
()
x
| Reply