Another U.S. Food Processing Plant Goes Up in Flames – Add This to Growing List 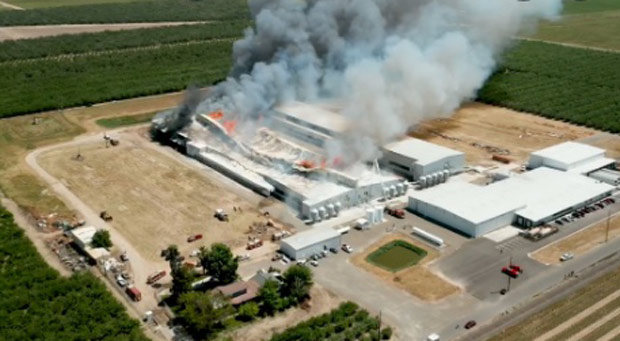 Another food processing plant has caught fire, this time a poultry business in California, adding to the growing list of U.S. food plants that have been destroyed by “accidental fires.”

Firefighters responded to the incident as heavy smoke billowed from the roof of the large industrial plant.

“As members [firefighters] began to deploy, the fire was upgraded to a third alarm commercial fire. Firefighters initially took a defensive stance and held the fire from spreading to any other nearby structures,” Montebello Fire Department said.

The fire was declared “knocked down” by 2000 local time.

There was no damage to other building structures nearby, KTLA reported.

The cause of the fire is still unknown.

Although the fire was an isolated incident, it comes amid growing concerns over food production and possible shortages.

The American Farm Bureau Federation reported that droughts throughout the U.S. have already forced farmers to destroy some crops and thin their herds.

The AFBF adds that drought conditions have put the production of beef, dairy, wheat, vegetables, fruits, and nuts at serious risk.

“Already, Americans have seen double-digit price increases in food categories this year. In the latest consumer price index report, meats, poultry, fish, and eggs leaped 12% from a year earlier, as bread rose 11% and milk increased 16%. That’s occurring as the U.S. Census Bureau has found about a 10th of Americans don’t have enough to eat,” Barron’s reported.

Though the fire does not seem very significant on its own, in context with the growing list of mysterious fires destroying America’s food supply chain, it becomes more of an issue.

You can see the complete list of “accidental fires” here.