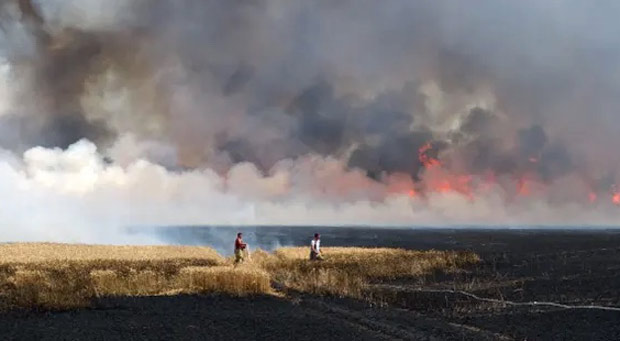 A worrying new crop failures report, published by the bloc’s Monitoring Agricultural Resources, forecasted corn yields in Europe could drop by almost a fifth due to the devastating drought reported to be “the worst in 500 years.”

According to the crop monitoring report, “Water and heat stress periods partly coincided with the sensitive flowering stage and grain filling,” adding, “This resulted in irreversibly lost yield potential.”

About half of Europe has been under drought warning this month as power plants, industry, fish populations, and crops have been devastated by the lack of rainfall.

Earlier this month, The European Commission Joint Research Centre warned the drought is “the worst in 500 years” as farmlands wither into dust.

As winter approaches, vast amounts of Europe face water shortages due to a very high risk of dry conditions over the next three months.

In July, EU supermarket prices for meat jumped 12% compared to 2021.

As the Fears continue to grow over a potential global food security crisis, European farmers struggle to save their crops from extreme weather events.

As much of Europe bakes in the latest heatwave, fears are growing about what’s being dubbed ‘heatflation’ crop losses that could see already inflated food prices reach new highs this autumn, deepening the cost-of-living crisis.

A lack of spring rainfall, combined with drought and freak storms, have spoiled crops in Italy, France, and Spain, with many farmers and agricultural associations warning that this year’s continental crop yields will be significantly smaller than usual.

According to an EU bulletin published last month, continental yields of crops such as soybean, sunflower, and maize were 9% below average.

In June, the National Farmers’ Union Federation (FNSEA) released a statement that “the damage is very significant, with some farms seeing 100% of their crop affected.”

French dairy farmers are also warning of a coming milk shortage this winter due to animal fodder shortages and parched grazing areas – a situation not helped by a ban on irrigation in large parts of the country due to water restrictions. In some places, levels are so low that drinking water is having to be brought in by truck.

In an updated assessment last month, the European Commission found that nearly half – 44 percent – of the EU and UK are experiencing “warning” levels of drought.

It warned that several countries, including France, Romania, Spain, Portugal, and Italy, will experience reduced crop yield in 2022 due to low soil moisture levels.

Isn’t it strange how we’re having food shortages all around the world? Almost as if this were planned or something…. like a huge coordinated effort world-wide.

Well of course it is. A vital part of the WEF’s Great Reset. No, they can’t regulate the weather (although the CCP have issued edicts for just that), but government “climate change” policies and international war and strife all contribute to the shortages.