Trudeau Gives Ukraine $400M for Air Defence, Which Canadian Army Has Begged for Since 2012 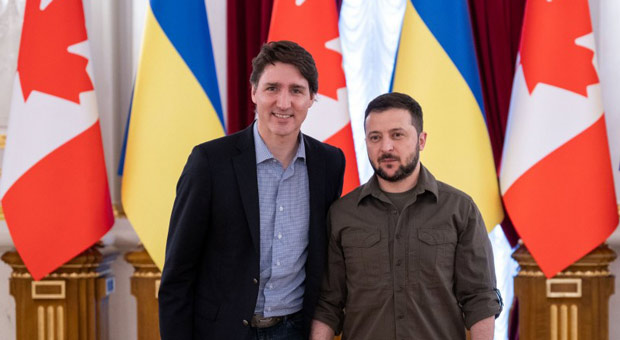 Prime Minister Justin Trudeau has promised to send over $400 million to Ukraine for a defence system the Canadian army has been begging the Government for since 2012.

The new defence system, a medium-range ground-based air defence system, will be purchased from the United States and given to the Ukrainian armed forces to help with their war against Russia, the National Post newspaper reports.

“We have committed over $1 billion in military assistance to Ukraine, and today we are moving forward with the first Canadian donation of an air defence system to Ukraine,” the defence minister said.

“Canada will continue to collaborate with the United States, as well as other Allies and partners, to address Ukraine’s defence priorities in the short and long term — including with high-capability equipment such as the NASAMS.”

Meanwhile, the Canadian armed forces vented anger after calling for the Federal Government to procure similar air defence since 2012 when its previous system was retired.

In 2018, the Trudeau government announced it would procure an air defence system for Canada, but it is yet to materialize.

When the defence ministry was pressed about how the Government was able to raise cash to pay for Ukraine’s air defence when it has not been able to so for its own country for twelve years, it claimed it was continuing “to work towards the procurement of Ground-Based Air Defence Equipment for the Canadian Armed Forces — and Minister Anand is committed to getting this done, as outlined in our defence policy.”

Trudeau is a prominent supporter of Ukrainian president Volodymyr Zelensky, who recently announced $375.7 million in military assistance for the country.

Meanwhile, other Western nations stepping to supply arms to Ukraine include France, which prompted a new furry of weapons shipments when it vowed to supply Ukraine with French-made AMX-10 RC “light tanks” last week.

As The Daily Fetched reported last month, Zelensky revealed he spoke with BlackRock Inc CEO Larry Fink about more funding for his country for the postwar rebuilding effort.

“Specialists of this company are already helping Ukraine to structure the fund for the reconstruction of our state,” Zelensky said in his address to the nation, according to Bloomberg.

The Ukrainian leader did not say whether he would attend Davos in person, although he has been a regular attendee in the past.