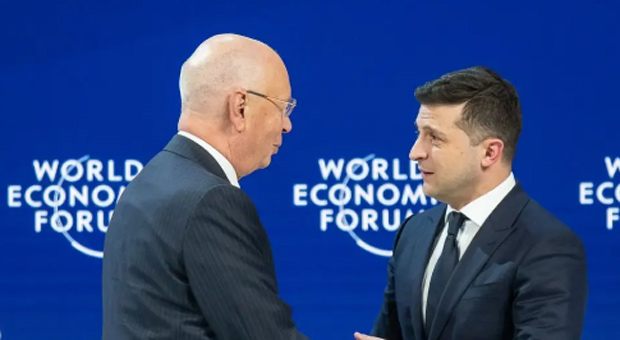 Zelensky revaled he spoke with BlackRock Inc CEO Larry Fink about more funding for his country for the postwar rebuilding effort.

“Specialists of this company are already helping Ukraine to structure the fund for the reconstruction of our state,” Zelensky said in his address to the nation, according to Bloomberg.

The Ukrainian leader did not say whether he would attend Davos in person, although he has been a regular attendee in the past.

In May, Zelensky made an appearance via video in which he compared his country to Israel in a conversation with WEF boss Klaus Schwab.

Zelensky told Schwab that whatever happens in the present conflict, “with a neighbour like this” — namely Russia — “anything can happen anytime, and the war may repeat itself.”

The Ukrainian president added that his government would have to “create such conditions that people and businesses would not be afraid to exist in this country, to thrive in this country.”

He then asked people to consider the “example of Israel,” which he claimed is in a similarly hostile environment to his country but still managed to establish a prosperous economy despite conflicts.

Earlier this month, Zelensky arrived at the White House sporting his signature camouflage-colored sweatshirt as he pleaded for even more taxpayer money for yet another round of defensive weapons funding.

As The Daily Fetched reported, Tucker Carlson noted the absurdity of the appearance as the United States continues to suffer its border woes after a pandemic-era federal immigration policy known as Title 42 expired.

“The president of Ukraine arrived at the White House dressed like the manager of a strip club and demanding money, and amazingly no one threw him out,” Carlson said.

“Instead they did whatever he wanted, and American taxpayers declared that Joe Biden will continue to give Zelensky whatever he demands for “As long as it takes,” Carlson added.