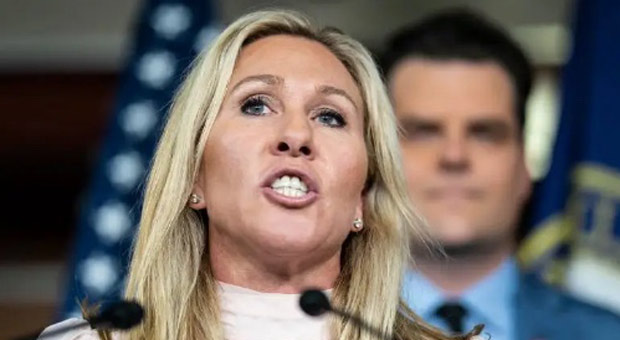 Greene, a prominent critic of sending U.S. funds to aid Ukraine, blasted Rep. Joe Wilson’s (R-SC) resolution that would direct the House’s Fine Arts Board to “obtain a bust of the President of Ukraine, Volodymyr Zelensky, for display in a suitable, permanent location in the House of Representatives wing of the United States Capitol.”

“We serve AMERICA NOT UKRAINE!” she declared.

Greene was joined by Rep. Andy Biggs (R-AZ), who also rejected the idea.

“There is now a House resolution that seeks to put a display of Zelensky’s head in the U.S. Capitol. Was the $100+ billion to Ukraine not enough?” Biggs tweeted.

This is not the first pro-Ukraine legislation Wilson has tried to introduce.

The South Carolina Republican has introduced multiple bills, including a bipartisan bill that designated Russia as a state sponsor of terrorism.

He also introduced a bill that sought to “bolster Ukraine’s defense capabilities and help protect its civilians” amid the war.

The House of Representatives Fine Arts Board is the body that approves the works of “fine art, historical objects, and similar property” displayed in office buildings controlled by the lower chamber of Congress.

why not a bust of Putin?

The original 13 colonies adopted the Constitution of the United “States” of America in 1787 after declaring independence.

The Founding Fathers were intelligent and educated men. They used the word “state” to replace “colonies,” knowing that “state” is fungible with “country.”

On July 16, 1790, Congress declared the city of Washington in the District of Columbia, the permanent capital of the United States, to operate under the Enumerated Powers for coordination within and without the new UNION (NOT “country”) making the federal government a co-ordinating entity, vice a ruling entity.

Thanks for the lesson

Zelensky’s head should be on display, period. His coordination with Washington’s emplacement of bio-labs on the Russian border precipitated Russia’s “military operation.”

Anyone who is a Kevin McCarthy fangirl is dead to me Hope whatever they promised you was worth it.