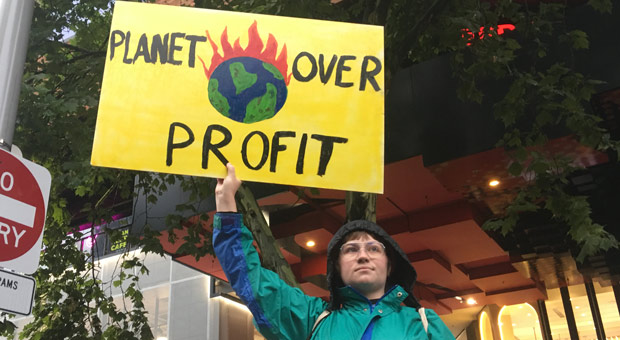 A leading German scientist argued that every person should have an individual CO2 limits to establish a “planetary guardrail” to fight climate change.

Schellnhuber said those who exceed their CO2 limits should be punished by paying extras for their pleasure.

As Taagesschau reported, Schellnhuber said there were two competing property rights issues at hand, specifically the right to spend one’s money on high CO2 activities and the rights of the rest of the population to “have an environment worth living [in].”

As The Daily Fetched reported in September last year, WEF speaker and Norwegian Finance CEO Kjerstin Braathen said people should be prepared for “pain” and “energy shortages” under the transition to the WEF’s climate change agenda.

“We need to accept that there will be some pain in the process,” Braathen said.

“The pace that we need [to end climate change] will open up for missteps. It will open up for shortages of energy. It will create inflationary pressures, and maybe we need to start talking about that — that pain is actually worth it,” he added.

“Because if we don’t, there’s no business case; there’s no economy; there’s no welfare. But so far, I think we have been a little bit careful actually talking about the pain in the short term that is likely to come from this very important change,” Braathen continued..

The “pain” Braathen is talking about appears to be in the form of a carbon credit style scheme, limiting people’s ability to keep themselves warm, travel, and eat.

Consequently, Schellnhuber suggested those who go over their CO2 limits would need to privately purchase credits from those who are under the limit, “Every person gets three tons of CO2 per year, but if you need more, you just have to buy it.”

According to the news outlet, the average German is far above Schellnhuber’s proposed limit.

Citing the Paris World Inequality lab, some millionaires produce over 100 tonnes of CO2 per year, while thousands of elites emit over 2,000 tonnes per year.

Although the scientist did not elaborate on how this would be monitored, what he is alluding to appears to be total surveillance of energy use.

The Davos meeting is ironic and immensely hypocritical, given that thousands of private jets descend upon the Swiss ski retreat.

As The Daily Fetched reported last week, the British government called for all new gas-powered boilers to be banned within the next ten years, according to a report on net zero goals.

The Independent Review of Net Zero, written by Conservative (Tory) MP Chris Skidmore, has called for a radical transformation of homes in the UK, calling for a complete ban on the sale of new gas boilers, replacing them with more environmentally friendly heat pumps.

The report was commissioned by former prime minister Liz Truss, who was poised to lift the ban on domestic fracking, ultimately killed off by current premier Rishi Sunak.

Skidmore admitted in the report that such a move would be an expensive process, hitting already struggling Britons with an estimated £4,000 to £6,000 by the year 2040.

Brexit leader Nigel Farage responded to the news saying such a move would only enrich Communist China.

“We are engaged in an act of self harm,” Farage said.

“It will not bring us economic benefits, it will make everybody a whole lot poorer and yet the lemmings in Parliament are all taking us toward the economic cliff,” he added.

“I can’t think of an issue in which the public and the politicians are now more divided.”