WHAT ARE THEY EXPECTING? WEF Increases Security at Davos with Roadblocks, Fingerprint Checking 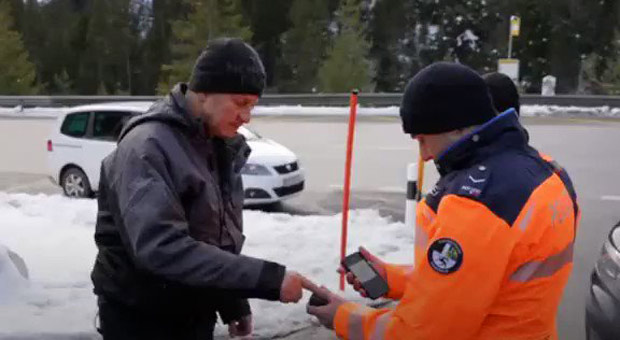 The Klaus Schwab-run World Economic Forum summit upped its security in Davos on Friday with reports of police and military personnel blocking roads and checking fingerprints.

A video posted on Twitter by Disclose.tv showed Swiss police scanning a person’s finger near the event location in Davos.

“Police and military have blocked the access roads to Davos, where Klaus Schwab is holding his World Economic Forum summit.People, vehicles, and fingerprints are now being checked,” Disclose.tv wrote.

Comparatively, the increase in security at Davos have become more extreme for this year’s event, possibly due to more people opposing the unelected globalist entity dictating the direction of the world.

On Thursday, The Daily Fetched reported that over five thousand soldiers were deployed to guard the event.

The soldiers from the Swiss army have been deployed to protect participants from harassment and dissenting voices.

The Swiss Defense Department (VBS) released a statement on January 6 confirming the Federal Assembly, the country’s parliament, had approved the deployment of the Swiss army, Blick reported.

The event has now taken drastic measures to counter protests reportedly expected to occur after the conferencing opening.

Meanwhile, forum president Borge Brende said some delegations requested that the names of their participants be kept secret, adding that unspecified “high-level” delegations from China and Ukraine would be in attendance.

This year’s meeting is headlined “Cooperation in a Fragmented World” and will follow from 2021’s “Great Reset.”

Davos will host globalist elites, including 52 heads of state and government and nearly 600 CEOs, for the event in luxurious surroundings.