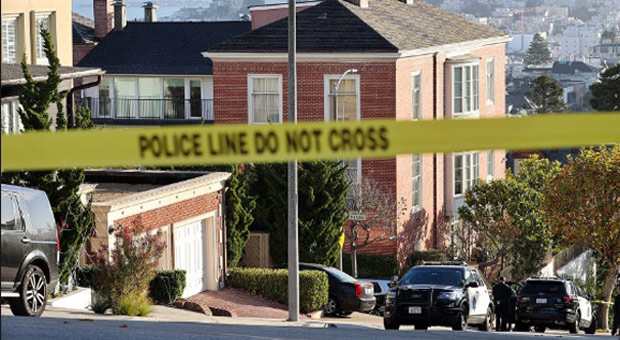 A mysterious ‘third’ person let police officers into Paul Pelosi’s home on the morning of the attack, according to developing reports.

San Francisco Police Department Chief Bill Scott said that upon the arrival of law enforcement officers to Pelosi’s home, “the door was opened by someone inside.”

Still, the identity of the person who opened the door remains a mystery.

“So when the officers arrived and knocked on the front door of the residence this morning, the door was opened by someone inside,” Scott said.

“And the officers observed through the open door Mr. Pelosi and the suspect, David DePape, inside the entryway of the home.

But as you can see in the picture of the broken door below, the fractured glass appears on the outside, indicating the glass may have been broken from the inside, not the outside.

DePape was disarmed after “violently assaulting” Pelosi with a hammer.

At this time, the officers remained outside of the threshold of the home. And they observed Mr. Pelosi and Mr. DePape, each with one hand on a single hammer. It was one hammer that the officers observed. Officers, while still outside of the doorway threshold, gave commands to both men to drop the hammer. Mr. DePape immediately pulled the hammer away from Mr. Pelosi and violently attacked him with the hammer. The officers immediately entered, tackled the suspect, disarmed him, then took the hammer away from him and took the suspect, Mr. DePape, into custody.

Scott added that DePape’s motive “is still being determined.”

But before DePape’s slew of “conspiracy theory” posts between Aug 24-28, the last time he posted before those dates were Jun 24, 2007.