Mitch McConnell Teams Up with Joe Biden to Promote Infrastructure 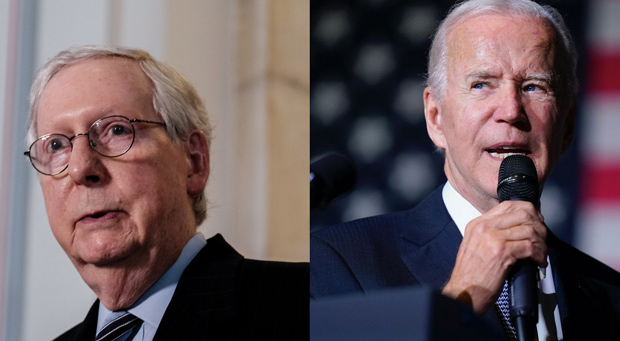 Biden will reportedly use his appearance with McConnell to signal bipartisanship with establishment Republicans.

Their meeting is believed to be a celebration of the eye-watering $1.2 trillion infrastructure bill passed in 2021, which McConnell and other RINOs helped Democrats push through.

There was a total of nineteen Senate Republicans who voted in favor of the bill.

Meanwhile, Trump supporters were surprised and angered at McConnell’s willingness to work with Biden to spend over a trillion dollars on infrastructure, despite stonewalling Trump’s efforts on the issue.

Now McConnell is openly meeting with Biden to promote infrastructure days after stating that Ukraine was their number one priority.

As The Daily Fetched reported, Trump’s attack came following McConnell’s NBC News interview last week, where he said he believes Trump hurts the Republican Party and even claimed his “political clout has diminished.”

“If the Old Crow waited just 10 days, the Republican Majority in the House could have made the ‘Ominous’ Bill MUCH, MUCH, MUCH BETTER. Just another win for the Democrats, Mitch, that wouldn’t have happened if ‘Trump’ were President!” Trump wrote on Truth Social Monday.

McConnell, however, defended his work with Biden.

“I’m proud of my vote,” McConnell said after the Democrat-led effort passed the Senate.

He added that the bill was “extremely good for my state.”

“Mitch McConnell actually said yesterday that most Republicans #1 priority is … Ukraine. I have yet to meet a single Republican that thinks that, but I guess the disconnect between actual republicans and DC swamp rats shouldn’t surprise anyone,” Donald Trump Jr. tweeted.