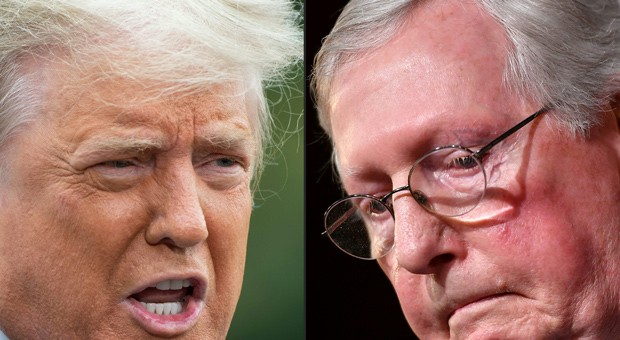 “If the Old Crow waited just 10 days, the Republican Majority in the House could have made the ‘Ominous’ Bill MUCH, MUCH, MUCH BETTER. Just another win for the Democrats, Mitch, that wouldn’t have happened if ‘Trump’ were President!” Trump wrote on Truth Social Monday.

In a Truth Social post on Friday, Trump wrote, “The Omnibus Bill is an unmitigated disaster. Mitch McConnell pushed it through for the Democrats. So bad for our Country, so bad for the Republican Party!”

McConnell, who used Trump’s powerful endorsements to remain a senator, still has a video montage posted on his “Team Mitch” official website, which cites the nice things Trump said about him.

But in true Judas style, McConnell stabbed Trump in the back during his NBC News interview:

“We lost support that we needed among independents and moderate Republicans, primarily related to the view they had of us as a party — largely made by the former president — that we were sort of nasty and tended toward chaos.”

McConnell and other Republicans were blasted for helping Democrats push the pork-laden bill.

Trump blasted McConnell again in a seperate Truth Social post, accusing him of being a puppet for Democratic leadership.

“The Marxist Democrats must have something really big on Mitch McConnell in order to get him and some of his friendly ‘Republican’ Senators to pass the horrendous ‘All Democrat, All the Way’ OMINOUS Bill,” Trump wrote.

He added, “It gives Border Security to other countries, but ZERO $’s to the U.S., it fully funds the corrupt ‘Justice’ Department, FBI (which RIGGED the Presidential Election!), and even the Trump Hating Special’ Prosecutor.’ It is also a massive giveaway & capitulation to CHINA, making COCO CHOW so happy!”

Donald Trump Jr. also responded to McConnell’s ridiculous comment, tweeting, “Mitch McConnell actually said yesterday that most Republicans #1 priority is … Ukraine. I have yet to meet a single Republican that thinks that, but I guess the disconnect between actual republicans and DC swamp rats shouldn’t surprise anyone.”