Matt Gaetz: It “Feels like the Democrats Are Taking Out Joe Biden” 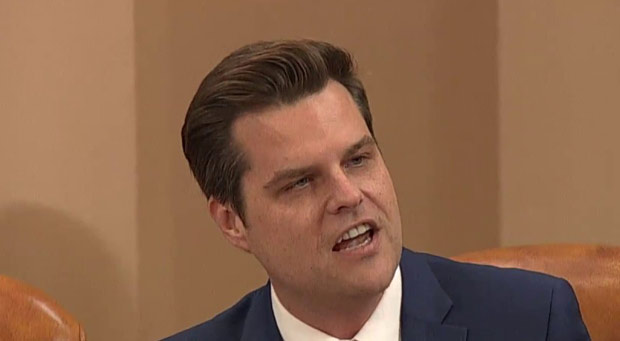 “There’s an element to this that feels like the Democrats are taking out Joe Biden,” Gaetz told Fox News.

“But just as Joe Biden is hardening the cement around his decision to run for president again, they start looking for what classified documents might have been tucked away eight years ago,” Gaetz added.

Three batches of classified documents were found in Biden’s properties, one at the Penn Biden Center in Washington, D.C., and two at his Wilmington, Delaware, property.

The Justice Department launched its investigation into Biden after the first batch was discovered by the president’s lawyers at the Penn Biden Center last year.

Gaetz said until it’s revealed what’s actually in the documents, everyhting is speculative.

“I mean, there’s an element of this where it’s Joe Biden‘s lawyer who turns this information over, it’s Joe Biden’s own Justice Department that’s appointed a special counsel to investigate him – maybe the Democrats have realized that Joe Biden is not useful to them anymore, and they just assume toss him out and get a younger crop of candidates engaged in the next presidential race,” he said.

Gaetz said one of the biggest concerns would be a possible connection between the documents and the reported millions in donations from unnamed Chinese donors to the University of Pennsylvania, which runs the center.

“We have a lot to learn about the content and substance of those documents, and if they relate to China, and if they were at that Biden Center at UPenn funded by China. That’s going to be a far more grave concern,” the congressman said.

“What if the documents relate to our economy?” he added.

“What if Joe Biden was hustling information to his CCP (Chinese Communist Party) funders at the Biden Center for UPenn and that gave China economic advantage over Americans?” Gaetz said.

“That would create a nexus between those documents and our economic woes at the hands of rising China. I don’t know because I don’t know what the documents pertain to, but documents in and of themselves don’t seem to have an obvious connection to the quality of life of my constituents in the absence of understanding their content and context,” Gaetz continued.

Gaetz said unless the documents’ controversy impact Americans personally, their focus will remain on the state of the economy.

“I haven’t been frothing at the mouth over the mere existence of some documents in a garage in Delaware,” he said.

“You know, I believe Americans are more worried about the weaponization of government against them than they are, you know, what papers Joe Biden stuffed in [the] glove box of his Corvette.”

“If the documents pertain to China and were at a repository funded by China, one could reasonably assess that the scandal runs deeper and would have a real damaging effect on our country,” he added.
If they are mementos or, you know, documents that have far outlived any sort of functional relevance quite some time ago, then I think that’s different.”

Gaetz commented on Twitter days earlier, writing that the Biden documents “aren’t critical to quality of life for my constituents.”

“I guess my view would change if the Biden docs related to China, as the CCP was functionally underwriting the Biden Center,” he added.

But Gergen’s claim may not be completely accurate, as we learned Attorney General Merrick Garland appointed a special counsel to oversee the federal investigation into the scandal last week.

“I do think that they, that the Biden people, they may be making a big mistake,” Gergen said.