Joe Rogan Reveals What He Was Told about George Soros: “It’s F***ing Terrifying” 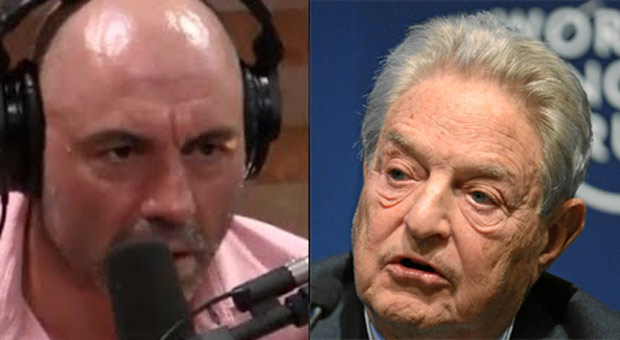 Joe Rogan revealed on his “Joe Rogan Experience” podcast what he was told about leftist mega-donor George Soros, describing the information as “terrifying.”

“I had a conversation with the governor of Texas about him, with Greg Abbott,” Rogan began.

“He was explaining to me what George Soros does, and it’s f***ing terrifying that he donates money to a very progressive, very leftist – whether it’s a D.A. or whatever politician, and then funds someone who is even further left than them to go against them,” Rogan said.

“He just keeps moving it along, so he’s playing like a global game, and that he enjoys doing it.”

Baker also noted how Soros possesses in-depth knowledge of how to change society from the ground level.

“It’s telling, right? He understood early on where you wanted to seize power, right? Sometimes you think , ‘A senator, that’s the pinnacle of success,’ well, it’s not, really,” Baker said.

“It’s the D.A.’s, and it’s the state-level politicians. That’s where real change occurs and where things can happen,” he noted.

“Or real corrosion,” Rogan pointed out.

Watch clip from the “Joe Rogan Experience” below:

“That’s what’s scary, is that it seems like he funds corrosion, it’s like he wants these cities to fall apart, he wants crime to flourish, it’s almost like he’s an evil person in a Batman movie.”

Baker went on to note that Soros “made his real fortune by almost busting the Bank of England. He’s not out there for truth and justice.”

Joe Rogan then read an article from late 2021 about how Soros had begun backing a media firm to “combat disinformation.”

He continued: “As part of its mission, it plans to invest in local news companies.”

Rogan’s remarks allude to one author who has been sounding the alarm about Soros’ media influence for years. Matt Palumbo, the author of The Man Behind the Curtain: Inside the Secret Network of George Soros, wrote in an op-ed on Bongino.com: Soros and fellow leftist billionaire Reid Hoffman (known for co-founding LinkedIn) founded the hilariously Orwellian-named “Good Information Inc.” The company has the stated mission of “tackling misinformation” (which they’ll presumably do by spreading misinformation), and is led by former Democratic strategist Tara McGowan, whose firm “ACRONYM” was known for epically botching running the 2020 Iowa caucus.

Rogan noted, “It’s all very weird. This guy has obviously been involved in politics at a very high level for decades and decades, and it seems like it’s his fun little game.”

Baker observed that Soros “likes being the puppet master, he likes pulling strings, he likes having that influence, that impact.”

Rogan noted how odd that Soros is “uniquely public about it,” later asking, “What’s his endgame?”

Rogan agreed, “I don’t think people realized the implications that it had on their actual lives, with politicians, what rules people could and couldn’t enact until the pandemic, until they shut down businesses, shut down restaurants, mandated certain things, mandated vaccines for children’s schools.”

He then added, “When you saw politicians doing things like that, that’s when people started freaking out, like, ‘I didn’t know you guys had that kinda f***ing power.'”