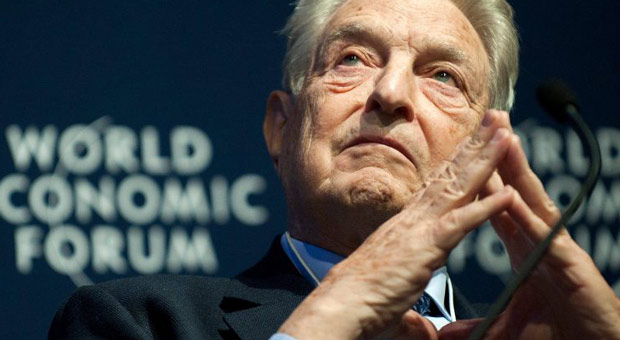 Billionaire George Soros is known for funding a lot of left-wing activities, one of them being the “fact-checking industry,” or in other words, a system to discredit any counter-narrative to the establishment media.

Matt Palumbo, the author of the explosive book, The Man Behind the Curtain: Inside the Secret Network of George Soros, highlights the most known U.S fact checker, PolitiFact, which has major funding from Soros-backed Tides Foundation and Tides Center to its parent company Poynter.

Matt Palumbo writes in a recently published op-ed on Bongino.com:

If you ever find yourself Googling George Soros’ name, you may find an ad from PolitiFact encouraging you to learn the “truth” about Soros. “George Soros does not pay protesters. Here’s the truth. The real purpose of the ‘paid protester’ myth.”

When you click through, you’re brought to a “fact check” of a claim from Candace Owens that Soros is “funding the chaos” in Minneapolis via the Open Society Foundations (this comment was during the 2020 George Floyd riots).

In the article, PolitiFact’s Fact checker Emily Venezky predictably rated Owens’ claim “false” while admitting that Soros donated $33 million to organizations “that have worked with Black Lives Matter or worked to raise awareness during the Ferguson-related protests.” Venezky then tries to hedge that admission by stating “However, they had never given money to groups for the express purpose of organizing protests with the movement.”

The purpose of the article seems to only serve to try to downplay the role of Soros in degrading law and order in the U.S., Whether or not Soros is funding protesters in the exact manner in the exact city that Candace is stating is almost irrelevant when we’re talking about a man that has spent $40 million funding over 70 far-left prosecutors nationwide, all of which implement soft-in-crime policies and favor defunding police departments.

Earlier this year, George Soros and fellow leftist billionaire Reid Hoffman (known for co-founding LinkedIn) founded the hilariously Orwellian-named “Good Information Inc.” The company has the stated mission of “tackling misinformation” (which they’ll presumably do by spreading misinformation), and is led by former Democratic strategist Tara McGowan, whose firm “ACRONYM” was known for epically botching running the 2020 Iowa caucus.

As the Hungarian publication Remix documented, as of mid-2020 of the 11 Facebook-approved fact checking organizations for Central and Eastern Europe, 8 are funded by Soros. As is the case for the U.S., these fact checking groups are largely critical of the political right in those countries.

In Poland, Facebook partnered with a fact checker called “Demagog,” which is funded by the Batory Foundation, a Polish NGO founded by Soros.

A Czech version of Demagog handles fact checking in the Czech Republic and admits on the FAQ section of their website to taking money from Soros’ Open Society Foundation.
Facebook picked “Re:Baltica” as their fact checker for Lithuania, which lists funding from the OSF (and other Soros-backed orgs, such as the ironically named “Organized Crime and Corruption Reporting Project”) on the bottom of their website’s homepage.

Lastly, the OSF-funded Vistinomer handles fact checking for Macedonia, while the OSF-funded Stop Fake, which was also founded with the assistance of the OSF, is in charge of Ukraine.
For nearly the entirety of Central and Eastern Europe, Soros-backed groups have a virtual monopoly on fact checking.

And we’re just getting started.

Matt Palumbo’s explosive book “Man Behind the Curtain: Inside the Secret Network of George Soros” is available now.

There’s no daylight between Soros and today’s democrat party, they’re one in the same.

Soros continues to prove himself an enemy of our country. He has caused so much damage to respect for our rule of law.