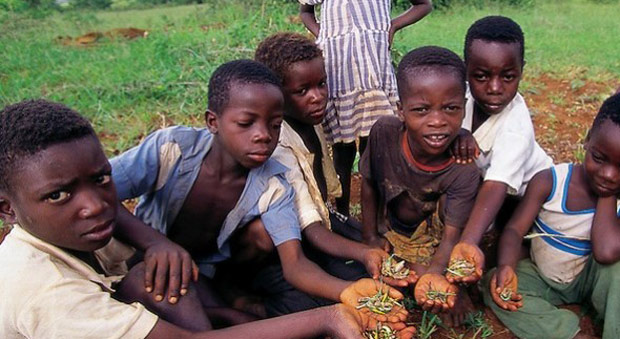 The new push to normalize eating bugs is now targeting the Democratic Republic of the Congo (DRC) and Zimbabwe as a sort of ‘testing ground,’ according to the Guardian.

According to the outlet, £50,000 (U.S.$57,000) UK aid project in the DRC is adding migratory locusts, black soldier, and African caterpillars to the menu.

The news comes just weeks after South Korean scientists argued that eating worms could help humanity save the planet.

By 2050, the United Nations announced that the global population is expected to reach 9.7 billion people and almost 11 billion by 2100.

The Catholic Agency for Overseas Development (Cafod) – a charity in England and Wales, hopes the Congolese will begin farming bugs and help end starvation.

READ MORE:  Zelensky Predicts 'There Would Be No War' If Putin Suddenly Dies

Meanwhile in Zimbabwe, another project to use mopane worms in porridge served in schools is now underway.

She told the Guardian: “We are also actively encouraging people in the developed world to include insects in their diets.

“With a population that has an appetite set to far exceed the planetary limits, and with current agriculture decimating biodiversity and changing the climate, we have no option but to change how we produce and consume food … and our views on the topic too.”

The Africa aid projects were funded through UK Research and Innovation (UKRI), an arms-length body of the Department for Business, Energy, and Industrial Strategy.

A UKRI spokesperson confirmed to the Guardian:

“We support specific research projects with funding, but we anticipate that the learnings and knowledge gleaned will benefit citizens around the world irrespective of their economic status. The protein and environmental benefits of consuming insects have been widely reported globally.”

ELIMINATE WEF AND ALL SUPPORTERS….PROBLEM SOLVED