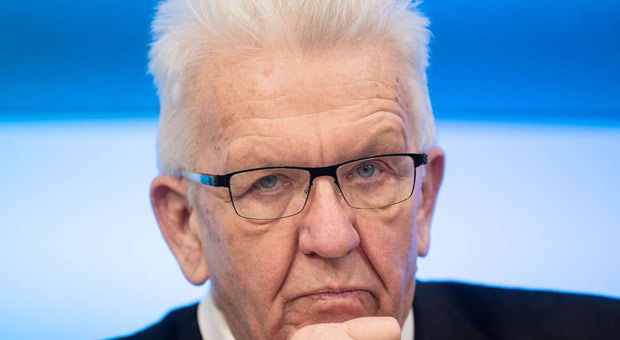 A top Green Party official has suggested that Germans use washcloths instead of taking showers to solve the country’s looming energy crisis.

The comments were made in response to the energy crisis as gas shortages loom amid the ongoing war in Ukraine.

“Even the washcloth is a useful invention,” the Green politician told Südwest-Presse.

Kretschmann boasted about his eco-credentials, “I have an electric car, I have a huge photovoltaic system on the roof.”

The pellet heating system used by the Green Party official costs anything up to €21,000 – a totally unrealistic figure for struggling Germans.

But the actual environmental cost of Kretschmann’s ‘solution’ was explained by Remix News.

“Wired magazine reports that these devices rely primarily on wood pellets sourced from forests in the southeastern United States. They are then shipped halfway around the world to individuals like Kretschmann despite many scientists arguing that these pellets are just as polluting as coal.”

“Although they come from a renewable resource, forests are cut down across the U.S. to make this resource, and according to Greenpeace, the practice destroys biodiversity and ruins entire ecosystems. Scientists estimate it takes between 44 to over 100 years for these forests to grow back, and for those worried about climate change, they say this destruction of natural forests will cost the planet immeasurably.”

“Our country faces an energy crisis that threatens the prosperity of millions of people! And what is the answer of the green father Kretschmann? Don’t shower every day: ‘The #Waschlappen is also a useful invention.’ What kind of people actually govern Germany?” asked Gerhard Papke, the president of the German-Hungarian Society.

Germany’s biggest cities are preparing for a massive energy crisis this winter as the country prepares to limit heat, shut off warm water and lighting.

The German government will prevent Hanover’s municipal buildings from using heating that exceeds a temperature of 68F. The city has also banned mobile air conditioning units and fan heaters as the energy crisis looms.

The city’s residents must also adapt by taking cold showers at city-run facilities.

Meanwhile, the country is facing a complete collapse of its power grid due to the soaring demand for electric heaters.

Meanwhile, the country is facing a complete collapse of its power grid due to the soaring demand for electric heaters.

As we reported earlier this month:

Telling Germans to stop taking showers to save energy.
Oh this is rich.
When did they START taking them?
Them and the French could have a steenky pit contest and be arm to arm for first place.

OH Wait!
Why aren’t they worried about the strain on the electric grid from all of the electric vehicles they want you to drive? Are they going to set times when you can charge your vehicle? Group “A” charges between 1 and 8 am and group “B” between 8amand 3 pm, and so on.
This is lunacy preached by the lunatics running things because the sheeple will not rise up and depose them. I thought Hitler was dead! Guess not.

They deleted my comment.
So much for freedom of speech!

And who the heck is going to want to visit Germany as a tourist now? Not me, which is sad as I’d like to. I’d say I’ll have to wait until this “existential threat” is over, but I’ll be dead before the left realizes they’ve been had. That OR the WEF/Davos/Chinese triumverate will be controlling the world before long making travel for anyone but them illegal.