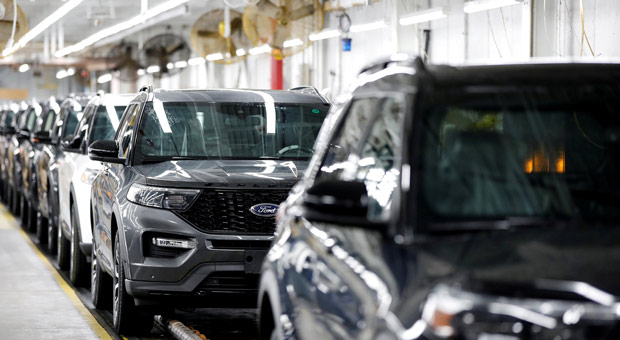 The news raises questions about whether supply chain issues persist.

The Dearborn automaker’s stock closed the day at $13.09.

Ford was forced to place 40,000 to 45,000 high-margin and high-demand trucks and SUVs in inventory at the end of the third quarter due to being unable to obtain proper parts because of a supply shortage.

Ford added that rampant inflation has made it expensive to purchase specific parts.

Ford adjusted their third-quarter earnings before interest and taxes (EBIT) between $1.4 to $1.7 billion – much lower than Wall Street estimations of $3 billion, Yahoo Finance reported.

In the second quarter, Ford’s rival General Motors (GM) also faced problems, as 95,000 vehicles were in inventory due to a shortage of components, according to CNBC.

GM also told investors that it expects all the vehicles to be ready to sell to dealers at the end of 2022.

As we reported in August, Ford said it could lay off approximately 3,000 workers to save money while it ‘transitions’ to electric vehicles.

As Wall Street Journal reported, the company’s internal email to employees announced it would begin notifying the affected salaried and agency workers in the next few days.

“The workforce reduction mostly targets employees in the U.S., Canada and India. About 2,000 of the targeted cuts will be salaried jobs at the Dearborn, Mich., auto maker. The remaining 1,000 employees are working in contract positions with outside agencies, the company said,” the article continued.

The email also said the company was changing to embrace updated technologies.

Chief Executive Jim Farley said Ford had too many employees “and that the existing workforce doesn’t have the expertise needed to transition to a portfolio of electric, software-laden vehicles.”

just call it what it is, no one wants electric c**p

Couldn’t be because they’ve gone almost in on EVs and are trying to cram them down our throats….could it? I wonder if Soros and his ilk are going to step up and fund Ford like they’re doing Disney, MSNBC, CNN, Wal-Mart and a whole slew of other “woke” and going broke companies?