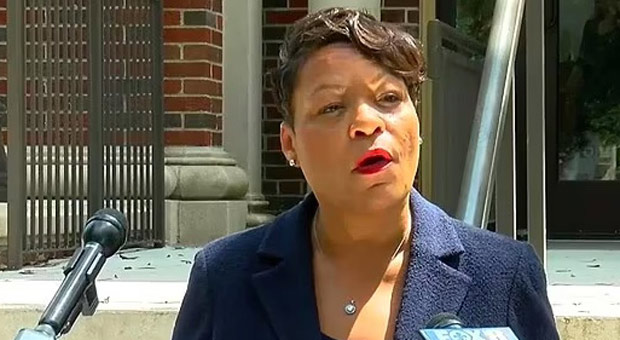 “My travel accommodations are a matter of safety, not of luxury.”

“As all women know, our health and safety are often disregarded and we are left to navigate alone,” she said.

“As the mother of a young child whom I live for, I am going to protect myself by any reasonable means in order to ensure I am there to see her grow into the strong woman I am raising her to be,” Cantrell added.

“Anyone who wants to question how I protect myself just doesn’t understand the world black women walk in,” she continued.

Cantrell has repeatedly refused to repay the cost of a luxury American Airlines flight from Washington Dulles Airport to Switzerland, despite a city ban on luxury air travel.

Cantrell blew $10,000 on her own flatbed seat and even spent a similar amount on a first-class return to France earlier this year.

Cantrell defended her purchase of the luxury tickets because she said it wouldn’t be safe for her to choose flying economy.

The Chief Administrative Officer said the law department is still reviewing whether Cantrell must reimburse almost $30,000 in taxpayer money for first-class tickets.

“One thing is clear; I do my job and I will continue to do it with distinction and integrity every step of the way. And so, that’s what I have to say on that!”

She also insisted that luxury travel expenses were necessary in order to better New Orleans itself.

But the city’s travel policy leaves little room for maneuver:

“Employees are required to purchase the lowest airfare available…Employees who choose an upgrade from coach, economy, or business class flights are solely responsible for the difference in cost.”

“Any reconciliation of travel expenses that results in overpayment by the City requires that the employee reimburse the City within twenty business days.”

The mayor’s own staff tell Fox 8 they are ‘checking’ to see if the city policy even applies to the mayor.

“I think that’s still under review with law kind of determining the variations between the CAO policy, the elected official policy, and the different variations,” Chief Administrative Officer for the city, Gilbert Montaño said.

“There’s no ultimate conclusion at this current moment. Right now it’s in law, and we are evaluating it and I think there would be a determination sooner rather than later.”