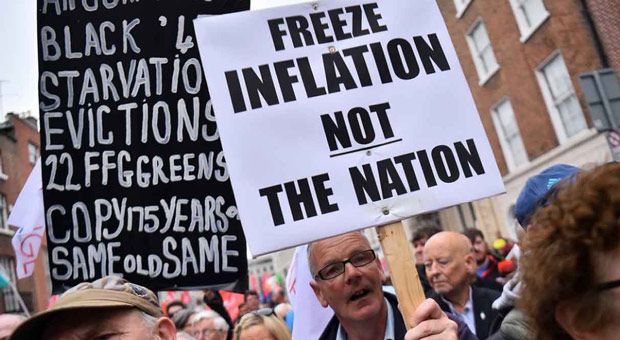 As Europe loses more economic power in the wake of the ongoing Ukraine war and its sanctions against Russia, living standards across the board are declining rapidly.

Countries like the U.K, France, and Germany continue to send funds to Ukraine, putting extra strain on its budget spending, as economies and living standards plummet.

Meanwhile, Britain’s energy prices are soaring as 60% of enterprises teeter on the verge of bankruptcy due to the inability to meet basic operational costs.

Analytical group Make UK reported that 13% of British factories were forced to reduce working hours, and 7%, while temporarily closing down.

Electricity bills have skyrocketed more than 100% compared to 2021.

It’s the same story in Germany.

According to the Leibniz Institute for Economic Research, the number of firms and individuals who went bankrupt in August jumped 26% compared to the same period in 2021.

Experts now predict that the number of bankruptcies will only increase. This is primarily due to the rise in energy prices affecting the cost of production processes.

But it seems the sacrifice on living standards is nothing more than authorities continuing to exert pressure on Russia.

But are the sanctions against Russia working? We reported last month that Russia’s state-owned gas company posted record profits despite Western sanctions – so it appears Russia’s energy independence has shielded them from any major economic dents:

The company recently announced it has cut off gas deliveries to Europe via its major Nord Stream pipeline, leaving the EU in a panic about whether the supply will ever be returned.

According to a report by Der Spiegel, Gazprom posted a six-month profit of around 2.5 trillion rubles, roughly equivalent to $41 billion.

The current situation has caused a sharp rise in prices of energy resources, resulting in the energy bills of European households soaring. Goldman Sachs analysts predict that the cumulative cost will peak in early 2023, increasing by 2 trillion euros.

Another consequence of mass production closures due to rising energy prices is unemployment.
European technology companies are already cutting the number of high-paying engineering positions.

The chain reaction of unemployment will effectively hit living standards.

Dutch Prime Minister Mark Rutte said, “You can’t help everyone, so we in the West will be a bit poorer because of the high inflation, the high energy costs.”

Meanwhile, over 10 million people left Ukraine for Europe since the end of February – of these, 6 million people remain, while 3.7 million have already received refugee status.

The cost per such migrant is 7,000 euros annually, and even without Ukrainians, Germany alone spends 25 to 55 billion euros annually on refugee aid.

Even without the energy crisis, these enormous expenditures are enough for the inevitable drop in living standards.