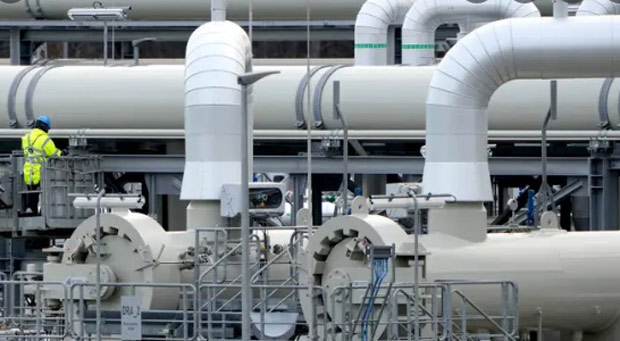 Russia’s state-owned gas company has posted record profits despite Western sanctions in the wake of the war with Ukraine.

Moscow’s energy industry now appears to be booming, despite efforts to ravage Russia’s economy in response to the country’s invasion of Ukraine.

The company recently announced it has cut off gas deliveries to Europe via its major Nord Stream pipeline, leaving the EU in panic as to whether the supply will ever be put back on again.

Gazprom posted a six-month profit of around 2.5 trillion rubles, roughly equivalent to $41 billion, according to a report by Der Spiegel.

The record profit figures are compared to last year’s record annual profit of 2.09 trillion rubles, a much smaller sum, especially when the value of the now surging ruble is factored in.

Gazprom says it plans to pay investors an interim dividend of 51.03 rubles per share for the first half of this year, including the Russian government, which has over a 50 percent stake in the company.

The news will be a massive blow for Western lawmakers who have been doing everything they can to ruin the Russian economy in response to Moscow’s invasion of Ukraine.

Meanwhile, in Europe, things look dire as Gazprom once again halted its gas supply through its Nord Stream 1 pipeline in order to perform repairs.

Russia also cut its gas supply to a major energy company in France as the European state faces fuel rationing.

Russia cut down on the amount of gas to the European state, as France now faces losing its much relied upon energy exports on Tuesday.

France would effectively force its householders to ration the use of energy this winter while begging the industry in the state to also reduce their usage.

Le Figaro reported that the Russian state gas company Gazprom announced that it was reducing the amount of gas it is sending to French energy company Engie with immediate effect.

Engie said the abrupt reduction was down to a “disagreement between the parties on the application of contracts.”

Over the years, Politicians have allowed their countries to become reliant on Russian energy exports, putting many countries in a vulnerable position.

As Breitbart reported, Germany’s Federal energy network says the claim of a shutdown of the pipeline for repairs is ‘incomprehensible’ and says this is actually a punishment of Germany for opposing Russia’s war against Ukraine.

But German Chancellor Olaf Scholz claims that his country is now prepared for the winter.

“…we have done what is necessary and can do even more to get through this winter and next winter,” the Chancellor declared, saying that the country had managed to store more gas than many expected it would be able to.

But Scholz’s confidence seems to be just a brave face, as other countries warn that there could be gas riots as people won’t be able t heat their homes.