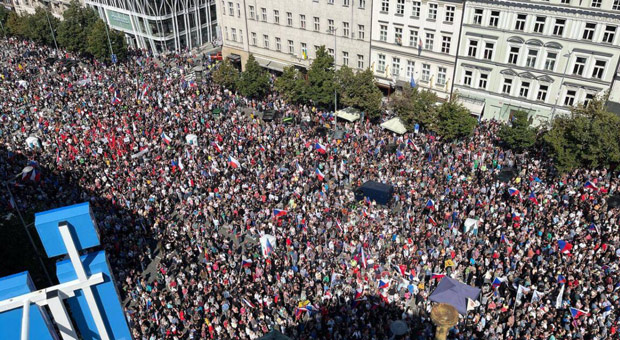 Citizens across the globe are rapidly rising up against their government’s failed leadership and globalist policies wreaking havoc on the economy; all the while vast amounts of the establishment media remain silent.

Tens of thousands of people openly reject the globalist ethos, which has resulted in soaring living costs and skyrocketing energy prices.

The protests are both direct in message and scope – the globalist idiocy must end.

In Indonesia, for example, thousands turned out en masse in some of the country’s biggest cities earlier this week, demanding their “government reverse its first subsidized fuel price increase in eight years amid soaring inflation.”

As Reuters reported, “[u]nder pressure to control a ballooning energy subsidy budget, President Joko Widodo on Saturday said he had little choice but to cut the subsidy and let fuel prices rise by about 30 percent,” with oil costs “32% higher than a year ago.”

“Protests took place in and around the capital, Jakarta, and in the cities of Surabaya, Makassar, Kendari, Aceh, and Yogyakarta, among a series of demonstrations led by students and labour groups that police say could draw big crowds this week.”

“Thousands of police were deployed across Jakarta, many guarding petrol stations, fearing they could become targets of mounting anger over a price increase that unions say will hurt workers and the urban poor the most.”

Indonesia is facing an economic meltdown as basic items like food are set to become more expensive as inflation skyrockets.

Meanwhile in Italy, Italians gathered in the streets of Naples to protest against the nation’s rising energy costs.

Angry citizens were filmed burning their energy bills while chanting phrases such as “We don’t pay the bills!” and “Now it will be chaos!”

As The London Economic noted, “Residents in the country will be asked to turn down the heating starting from October to help curb energy use, with limits on the use of central heating in public buildings also being brought in.”

Italians now face a brutal winter after European sanctions pelted Moscow with sanctions, one of their biggest gas importers, as the country races towards “green energy.”

Chile also so mass protests as citizens rejected a newly proposed, left-wing constitution providing the government with more control over the country’s citizenry.

On Saturday, 70,000 citizens in the Czech Republic flooded the nation’s capital of Prague to protest their government’s handling of the ongoing energy crisis and opposition to the European Union and NATO.

Demonstrators “held Czech flags, as well as placards against the EU and NATO, Prime Minister Petr Fiala, rising energy prices, and calls for neutrality and dialogue with Russia.”

Protestors also demanded “the resignation of the current coalition government of conservative Prime Minister Petr Fiala, whom they criticize for following pro-Western policies and allegedly paying more attention to war-torn Ukraine than to his citizens.”

“The purpose of our demonstration is to demand change, mainly in solving the issue of energy prices, especially electricity and gas, which will destroy our economy this fall,” event co-organizer Jiří Havel said.

Other countries like New Zealand and Germany have also experienced protests against their governments as the uprising continues.

The MSM is a “for profit” enterprise. They’ll go with whatever brings in ratings, unless it contradicts TPTB message. It is heartening to see people all over the world realize and speak out on the cult of Globalization. There may be Hope yet.

No Thanks
Reply to  Mivoyses

Folks seriously if we do not speak out and resist and fight back, we are going to end up DEAD. Please resist!!!

bridget santos
Reply to  No Thanks

Many people want to resist; they don’t know what to do.

h**g a few save millions of you. Sounds worth it to me since they are betraying you.

As British Lord Acton noted so many years ago, “Power corrupts.” It corrupts everyone in whom power is entrusted. The more power, the easier corrupted. Global power practically guarantees corruption.