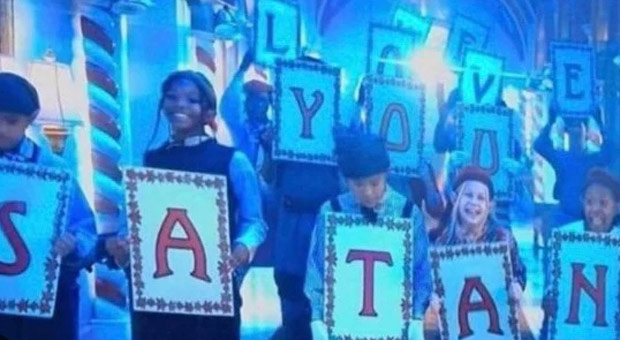 A new Disney Christmas show featured children holding signs that spell out “WE LOVE YOU SATAN,” causing backlash in the wake of the Balenciaga scandal.

The scene showed children holding up letters spelling ‘SATAN’ appeared in a Disney + spin-off of the popular Tim Allen movies.

The sign was meant to spell out We Love You, Santa,” but the scene takes a supposed comical turn when the kids end up in the wrong position.

There would be a time when audiences would receive this type of humor well, but not anymore. We are now in an era where bizzare fetishes for satanic child torture within the fashion industry are rearing their ugly head, and things like misspelling ‘Santa’ to spell ‘Satan’ rub salt in the wound.

A kids Christmas show making references to Satan, even it is meant to be humorous, doesn’t go down to well.

The news comes amid the explosive Balenciaga scandal, where the brand has been caught openly promoting satanism and h sexualizing children.

“If it was done on purpose, which we’ve just deciphered, it must have been; why are they doing this?” Tate said in a recent video.

“I don’t think many people understand why a brand like Balenciaga so openly shows the world they are trying to promote pedophilia,” Tate added.

“Satanists believe that by telling you what they are doing, they don’t have any karmic retribution,” Tate claimed, adding it helps them “avoid the negative fallout” of such actions.