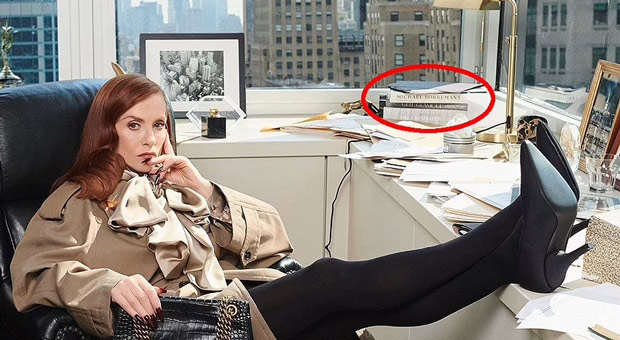 For weeks Twitter and independent media have been reporting on the Michael Borremans book, which appeared in the now-axed Balenciaga campaign, featuring paintings which depicted castrated toddlers, torture, and unsettling dark imagery seemingly focused on the suffering of children.

Now, for the first time, The Daily Mail has reported on the Belgian painter Michael Borremans, whose artwork unleashes a glimpse into the incredibly distressing world of child torture, which Balenciaga lauded on their Spring 2023 ad campaign featuring French actress Isabelle Huppert.

Why is this important?

If Elon Musk had not recently opened the free speech floodgates on Twitter, the majority of the world would be unaware of Balenciaga’s link to Michael Borremans, mainly because anyone posting such findings would have been banned and labeled a ‘conspiracy theorist,’ killing the story dead in the water.

Now, this information is freely available on Twitter; thanks to Musk, journalists and media writers who use the platform to source stories can no longer ignore the vast rabbit hole of Balenciaga.

Here is what The Daily Mail wrote:

Two photos from the brand’s now-canceled Spring ’23 ad campaign feature French actress Isabelle Huppert posing in a Manhattan office with a stack of books behind her.

Among the books is one that celebrates the Belgian painter Michael Borremans. Borremans’ work is varied but frequently features children. His 2017/2018 series, Fire from the Sun, shows a group of toddlers, some of them with blood staining their skin, in sinister composition.

In some of the images, the toddlers appear castrated.

Balenciaga has yet to comment on the Borremans book or how it made it into its Spring ’23 campaign.

There are other distinct similarities between Borremans’ work and some of Balenciaga’s past designs – namely, Kim’s look at the 2021 Met Gala, where she appeared with black fabric covering her face.

Those images showed young child models holding the bears – which are in fact, fluffy handbags – posing around glassware.

“We would like to address the controversies surrounding our recent ad campaigns. We strongly condemn child abuse; it was never our intent to include it in our narrative. “

“The two separate ad campaigns in questions reflect a series of grievous errors for which Balenciaga takes responsibility,” the said.

“The second, separate campaign for Spring 2023, which was meant to replicate a business office environment, included a photo with a page in the background from a supreme court ruling which confirms as illegal and not protected by freedom of speech the promotion of child pornography.”

“All the items included in this shooting were provided by third parties that confirmed in writing that these props were fake office documents,” Balenciaga said.

“The inclusion of these unapproved documents was the result of reckless negligence for which Balenciaga has filed a complaint,” they continued.

“We take full accountability for our lack of oversight and control of the documents in the background and we could have done things differently.'”

How could a world-renowned fashion brand with hundreds if not thousands of employees doing cross-checks on international campaigns miss something like this?

It seems Balenciaga’s fall guy will be North Six and set designer Nicholas Des Jardins, who the fashion brand is now suing.

Des Jardins’agent argued he is being made the scapegoat, adding that multiple Balenciaga staffers were on-set at the time of the shoot.

“Accountability only when successful – that seems to be the mantra of Balenciaga this week,” 1 Granary said.

“They would like us to believe that Demna is the all-seeing god-like genius who personally makes every creative decision in the house… yet, when a campaign gets rightly canceled, those outside collaborators are suddenly to blame,” they added.

“Real leaders take responsibility. For their team’s mistakes and their own,” they said.

Balenciaga’s lawyers blame the studio for the controversy, failing to mention of the bear’s controversy from earlier in the week.

“As a result of Defendants’ misconduct, members of the public, including the news media, have falsely and horrifically associated Balenciaga with the repulsive and deeply disturbing subject of the court decision,” court documents reveal.

“Defendants are liable to Balenciaga for all harm resulting from this false association.”