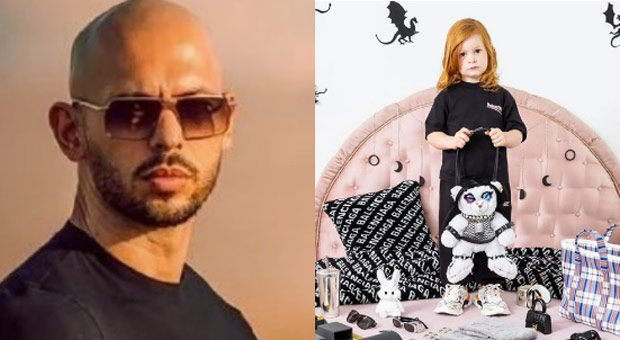 Balenciaga recently blamed its producers for inserting subliminal messages inciting pedophilia in their ads and is now suing them for $25 million.

But Tate says there is no way the brand wouldn’t have known before the campaign was approved.

“If it was done on purpose, which we’ve just deciphered, it must have been; why are they doing this?” Tate said in a recent video.

“I don’t think many people understand why a brand like Balenciaga so openly shows the world they are trying to promote pedophilia,” Tate added.

“Some would argue they are trying to advertise, encourage or normalize it. That is the case; that is what they are trying to do. But it actually goes a level deeper. Satanists believe in karmic retribution; they believe they can suffer the consequences of lying and tricking you,” he said.

“Satanists believe that by telling you what they are doing, they don’t have any karmic retribution,” Tate claimed, adding it helps them “avoid the negative fallout” of such actions.

“But if I do it hidden behind your back, then you could argue that you didn’t know they were pedophiles.”

“This karmic retribution model can be applied to so many scenarios. They’re doing this with everything.”

The buck stops with Balenciaga

According to a report from The Drum, Balenciaga will be taking legal action against the creative teams behind both shoots, who aren’t full-time employees.

“There are months of planning and ironing out every detail of an idea between the brand and the production team/photographer,“ explains Zara Ineson, executive creative director at House 337, which works with M&S and SimplyBe.

“On the day, there are big teams and people running around all over the place – it can feel chaotic and things can slip through the net,” Ineson said.

“However, the brand or agency’s creative director rules the roost. If they’re doing their jobs, they scrutinize every detail of a shot and make the final call on when they’ve got it right to move on.“

“Balenciaga recently blamed its producers for inserting subliminal messages inciting pedophilia in their ads…” LOL! There was nothing “subliminal” about it…it was children playing among bondage gear! That’s OVERT, not subliminal.