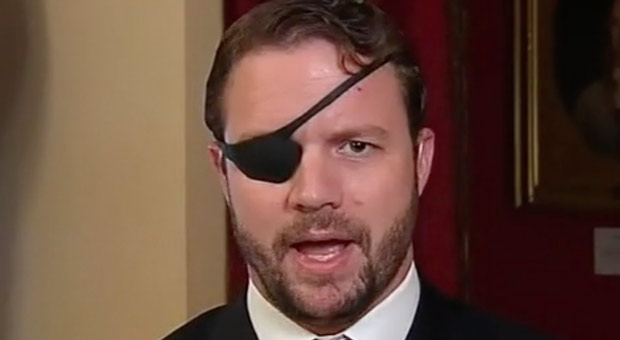 Rep. Dan Crenshaw (R-TX) fired back after Communist China warned that House Speaker Nancy Pelosi’s visit to Taiwan would have “a severe impact on the political foundation of China-U.S. relations.”

“You don’t tell us when our elected representatives can visit other countries, as they always have, since our nation’s inception.”

“No amount of toddler-esque saber-rattling will change that.”

As The Daily Fetched reported on Tuesday:

Meanwhile, according to Reuters, several Chinese warships have been sailing near the unofficial dividing line since Monday.

The source said Chinese warships and aircraft “squeezed” the median line, which they described as a “very provocative” and unusual move.

“The Chinese military announced joint air and sea drills near Taiwan starting on Tuesday night and test launch of conventional missiles in the sea east of Taiwan, with Chinese state news agency Xinhua describing live-fire drills and other exercises around Taiwan from Thursday to Sunday,” the outlet added.

READ MORE:  MSNBC Declares War: All Republicans Are ‘Evil’ and a ‘Threat to Democracy’

“Those who play with fire will perish by it. It is hoped that the U.S. will be clear-eyed about this,” the Chinese statement said Xi warned.

A report in 2020 appeared in a Communist Chinese state media outlet stating Communist China was targeting various GOP politicians critical of the regime, including Crenshaw.

Dan Crenshaw blasted the regime for its actions regarding the coronavirus, issuing a defiant tweet in response, snapping, “So apparently I’m on the Chinese government’s radar now. Good. Bring it.”

Crenshaw said in April 2020, China, “They allowed this virus to spread.”

“They knew it would spread; they spread false talking points like it won’t spread from human to human contact. They didn’t let scientists in to investigate. They actually disappeared doctors who tried to blow the whistle. The number of deaths and infections they hid.”

Too bad he can’t be that tough on what’s wrong in America. Mister,You can go straight to h**l with your showboating.

I do agree with Crenshaw on this. Pelosi did the right thing by visiting Taiwan. The CCP is backed by the WEF and the Swiss. They are preparing to rule the planet with ruthless fervor if they are not stopped “stone cold”.