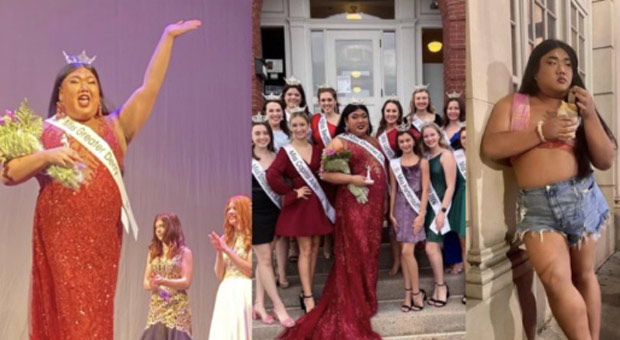 Earlier this week, we saw the first trans winner of the Miss Greater Derry beauty pageant, a news story the woke liberal media celebrated as some “milestone” of inclusivity.

Brían Nguyen became the first biological male to win a title under the Miss America Organization – The Miss Greater Derry Scholarship Program provides scholarships to “young women” between the ages of 17 and 24.

I won the Miss Great Britain competition in 1998, and aside from all the glitz and glamour on the surface, it involved a lot of time and effort. Seeing the news that Brían Nguyen won the pageant made me think how I would feel if I was beaten by a large biological male after spending months training and preparing for the contest. Winning the competition opened up a world of opportunities to me, a result of being allowed to fairly compete in an era absent of woke ideology. Sadly these young women today are not being given the same chance.

According to the Miss Greater Derry Scholarship Program, it touts itself as “providing scholarship opportunities to young women in the greater Derry area since 1987.”

Allowing a transgender-identifying biological male to win a contest without merit hardly gives young women opportunities; if anything, it is indoctrinating them into a perverted idea of what female beauty is, blurring the lines of societal markers which sets precedents for decline rather than growth.

Over the past two years, we’ve seen biological males compete against women in female sports tournaments, with the unfair advantage of, well, being a man.

But what’s different with this beauty pageant is Brían Nguyen did not have any advantages; apart from being an overweight transgender-identifying individual, a far cry from what society would have once classed as a ‘natural beauty.’

Nguyen’s testosterone and large build definitely didn’t score any advantages, but what helped was society’s increasingly ‘woke’ desperation to signal “inclusivity.” Nguyen has just been lucky enough to be born in the right era.

What’s even more bizarre is the Miss America organization was not even forced to include trans-identifying men but did anyway. This speaks volumes as it shows how organizations are becoming more than willing to put their entire reputation on the line for a spot of virtue signalling.

This is not the first time a transgender person entered the beauty pageant world.

This is all part of the transgender indoctrination of children, schools, and society. It is an attempt to blur the lines between masculinity and femininity, and decimate what it means to be a woman.

The destruction of the West isn’t just about taking down the economy, but also the very fabric of what we define as beauty, amid the complete collapse of culture and morals.

While adults fixate on soaring inflation, interests hikes and a looming economic collapse, their children are being completely reprogrammed to accept an inverted and perverted ideology that can only be described as satanic. As such, trans biological men winning beauty pageant’s should serve as a line in the sand for women everywhere, a stark warning that this agenda will continue relentlessly unless we grow a backbone. Women need to stand up against this madness without the fear of offending or being cancelled by the ‘woke’ mob.

“Before mass leaders seize the power to fit reality to their lies, their propaganda is marked by its extreme contempt for facts as such, for in their opinion fact depends entirely on the power of man who can fabricate it.” – Hannah Arendt, The Origins of Totalitarianism

I have no symphathy for women anymore, they are the ones who gave the Demcorats the win so the US can be destroyed. It was the White College Educated Female who voted Democrat because they wanted abortions!
Joe Biden: American Women ‘Showed Up and Beat the h**l Out Of’ Republicans.
https ://www .breitbart .com/politics/2022/11/10/joe-biden-american-women-showed-up-and-beat-the-h**l-out-of-republicans/

College-educated suburban single woman here. Voted Republican in 2016, 2020, 2022, and plan to continue. I’m pro-life and against the woke agenda.

Thank you for your Comments you are a champion john wilson I agree with you it’s not fare that he can even enter and win such as a woman’s world beauty pageant. It just goes to show the Democrat’s can’t be trusted and the judges to go along with them should be banned what a disgrace.
All you GIRLS should have stood down that would have put a” Bull in a China Shop”

This is the most disturbing thing that can happen to real women, to be upstaged by a man posing as a women and the judges who went along with this assault on the gender of real women making them irrelevant.

When are people around the world going to stand up against this mentally deranged thought process!!!

It’s supposed to go to a female BEAUTY pageant winner !
This boy is b**t ugly and what judge would choose him over beautiful young girls without
some outside force of some kind telling them to to choose him is the question.

Men competing with women works for only ONE reason—the women allow it. That MALE swimmer’s career would have been over the first meet if, when the whistle blew, no woman would have jumped into the water. That contest would have gone to someone who deserved it if the bio females had any collective sense. They don’t. Instead they go along with nonsense to be politically correct at the cost of everything they worked for…and the women before them worked for. These women are spineless wonders—no guts, no glory. To foolishly compete in a game a woman cannot win against a bio male (with no shame) is asinine. Women will continue to lose…everything. And they deserve it!

Boycott Tampax Trends on Twitter After Creepy Tweet From the Brand Goes Viral
Feminine product brand Tampax began trending on Twitter yesterday after followers demanded a boycott....
No posts found
wpDiscuz
9
0
What are your thoughts? Click to commentx
()
x
| Reply