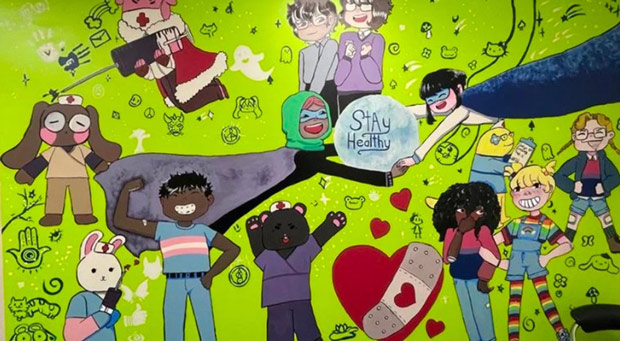 A mural at a Michigan middle school has sparked outrage from parents for featuring a face of a demon and a child wearing a transgender flag.

The mural, painted by a student, features a creature holding a syringe, and the Hamsa hand.

The mural creator, Evelyn Gonzales, told the local station WZZM that she created it to “make people feel welcome.”

But issues regarding the mural were raised during a school board meeting Monday, in which Gonzales was present.

Gonzalez argued that the demon is from a video game, claiming she was not intentionally painting satan.

Over 50 parents spoke out about the artwork.

“I feel like she did a really good job finding excuses to defend the things she put on,” said parent Katelyn Thompson, according to the WZZM report. “None of us are that stupid.”

The parents also highlighted the transgender flag as being an issue.

The demon, the Hamsa hand, and other portions of the mural were not included in the draft she had submitted.

The school said they would remove those elements but said the rainbows and transgender flag could stay.

“After careful consideration and discussion with our students, staff, Board, and community members, it has been agreed upon that the mural will remain with some adjustments,” the school said in a statement following the heated meeting.

“At the student artist’s request, the mural will be returned to its original form as originally submitted and approved by the Administration,” it added.

The statement continued, “At Grant Public Schools, we are committed to promoting civility, respect, understanding and inclusion. We do not condone, and we will not tolerate discrimination, harassment or bullying whether in word, deed or on social media.”

The Hamsa is not “synonymous with witchcraft” what an incredibly ignorant and borderline Anti-semetic thing to say. 2 seconds of research and you would know that it’s a symbol used by Jewish people among others of Arabic culture. Good grief.