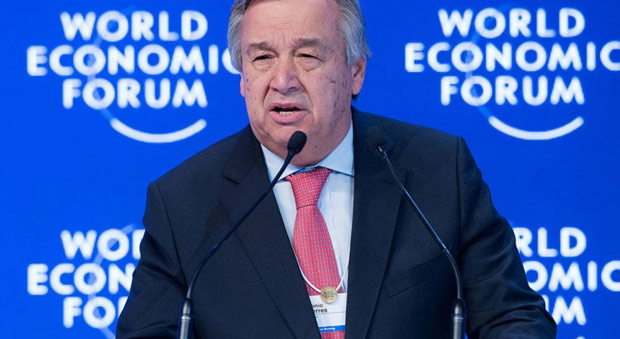 Antonio Guterres, the secretary-general of the United Nations, accused the oil industry of “grotesque greed,” calling for more taxes on their profits.

Guterres urged governments to tax profits of oil companies whose combined profits were ‘close to $100 billion” so far in this year.

Guterres, who has been working alongside The World Economic Forum on their Agenda 2030 to phase out fossil fuels and private car ownership, argued it is “immoral for oil and gas companies to be making record profits.”

The Secretary-general also slammed the oil industry for making profits from this energy crisis on the backs of the poorest people and communities,” adding it is “at a massive cost to the climate,” as quoted by Reuters.

“I urge all governments to tax these excessive profits and use the funds to support the most vulnerable people through these difficult times,” he also said.

“And I urge people everywhere to send a clear message to the fossil fuel industry and their financiers: that this grotesque greed is punishing the poorest and most vulnerable people, while destroying our only common home.”

“New funding for fossil fuel exploration and production infrastructure is delusional. It will only further feed the scourge of war, pollution, and climate catastrophe,” Guterres said.

“Had we invested massively in renewable energy in the past, we should not be so dramatically at the mercy of the instability of fossil fuel markets now,” he said in June.

Due to soaring oil prices, big oil majors reported massive profits for the first and second quarters of 2022.

The global ‘transition’ away from fossil fuels

“This transition from fossil fuels to renewables will need large supplies of critical metals such as cobalt, lithium, nickel, to name a few,” the forum said in a report earlier this month.

“Shortages of these critical minerals could raise the costs of clean energy technologies.”

The WEF argued for people to sell their cars, walk or share vehicles because “Car sharing platforms such as Getaround and BlueSG have already seized that opportunity to offer vehicles where you pay per hour used.”

International Energy Agency (IEA) told countries they needed to reduce the oil supply to domestic consumers and “nudge” people out of their private cars to lower consumption.

Meanwhile, International Energy Agency (IEA) plan, which was cited in the WEF paper, is to reduce the consumption of gas by reducing speed limits, using more electric cars, constructing more bicycle lanes, creating cheap public transportation, utilizing trains instead of airplanes, and having people work from home at least three days per week.

IEA stated that in order to stop the “climate apocalypse,” governments must force people “out of private cars because they are the biggest offenders for emissions.”

Their proposals included banning fossil fuel vehicles. Several European countries and states in America, such as Washington, New York, and California, have already passed legislation that will ban the sale of non-electric cars as soon as 2030.