U.N. Secretary-General: We’re ‘One Miscalculation Away from Nuclear Annihilation’ 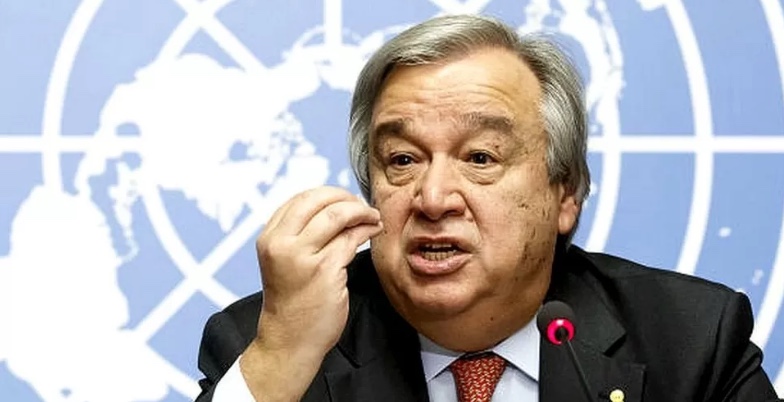 Guterres said the “nuclear danger” has not been seen “since the height of the Cold War,” adding the world is “one miscalculation away from nuclear annihilation.”

The U.N. chief issued the warning at the Tenth Review Conference for countries signed up to the nuclear Non-Proliferation Treaty (NPT)

“States are seeking false security in stockpiling and spending hundreds of billions of dollars on doomsday weapons that have no place on our planet,” Guterres said.

“We have been extraordinarily lucky so far. But luck is not a strategy. Nor is it a shield from geopolitical tensions boiling over into nuclear conflict,” he continued.

He notes that 13,000 nuclear weapons are being held in arsenals worldwide.

“Today, humanity is just one misunderstanding, one miscalculation away from nuclear annihilation,” Guterres said.

He urged nations to “put humanity on a new path towards a world free of nuclear weapons.”

The NPT is an international treaty aiming to reduce nuclear weapons and weapons technology across the globe.

191 states have joined the treaty

But countries like India, Israel, North Korea, and Pakistan, suspected of harboring vast amounts of nuclear weapons, have not signed the treaty.

The treaty review, which happens once every five years, was delayed in 2020 because of the coronavirus pandemic.

However, the treaty will run through Aug. 26 this year.

Guterres emphasized the importance of the NPT, adding that the review gives a chance to “put humanity on a new path towards a world free of nuclear weapons.”

He went on to cite Russia’s war in Ukraine along with the tensions on the Korean peninsula and in the Middle East.

Last month, New York City launched a public service announcement informing residents of what to do in the event of a nuclear attack.

Though officials say a nuclear weapon in New York is unlikely, they said it is important for residents to be aware how to stay safe.

Meanwhile, Russian President Vladimir Putin wrote a letter to the NPT conference, stating a nuclear war should never be allowed to happen.

“There can be no winners in a nuclear war and it must never be unleashed, and we stand for equal and indivisible security for all members of the world community,” he wrote.

.and a drunken sot like Pelosi could be that miscalculation…