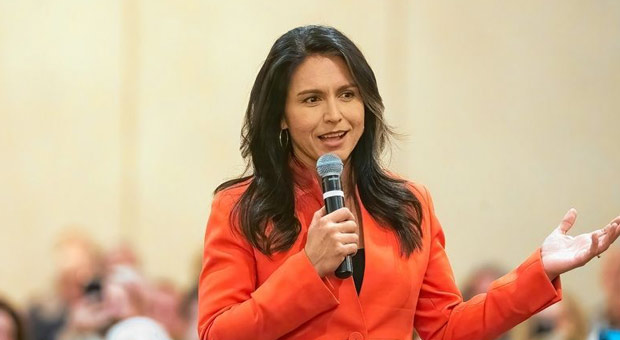 “I’m Tulsi Gabbard, and Kristi Noem is a friend of mine. We believe in defending freedom and protecting what makes this country so special,” Gabbard says in the ad.

“Tim Ryan represents everything that is wrong with the warmongering Washington Establishment. I’m endorsing @JDVance1 because he knows the cost of war, and that our government exists to serve the people, not the other way around,” she wrote.

“I’m here and really proud to support fellow veteran Tom Barrett, who’s stepping up to serve and lead our country in a time of need in Congress. Having served in Congress for eight years on the Armed Services and Foreign Affairs Committees, I know firsthand that a vote for Slotkin is a vote for more war,” Gabbard said.

“Thank you @TulsiGabbard for walking away from the radical left, cancel culture, & censorship & standing for the Constitution, freedom, & our country,” Laxalt shared in response to Gabbard’s support.

The former Democrats sew of endorsements comes just over a week before the midterms elections.

Gabbard announced her departure from the Democrat party following months of criticisms against the Biden administration’s agenda.

“I can no longer remain in today’s Democratic Party that is now under the complete control of an elitist cabal of warmongers driven by cowardly wokeness, who divide us by racializing every issue & stoke anti-white racism,” Gabbard asserted during an episode of “The Tulsi Gabbard Show.”