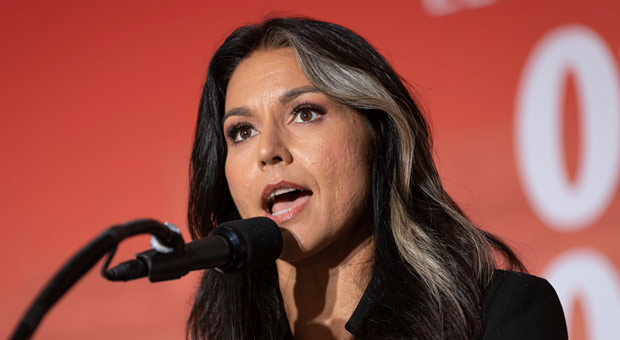 Gabbard discussed how more people are beginning to question who their elected officials are actually working for – the people or themselves.

Rogan said people should question, calling it a “complicated union … between money and politics.”

“I mean, it would be wonderful if we could get money entirely out of politics,” Rogan said.

“If the only way that a politician could make money while they’re in office is just their salary,” the host shared. “Like, I’m sure you’re aware of the Nancy Pelosi stuff, it’s wild.”

“And look, I think this is one of the good things about social media, is — of course, the mainstream corporate media is hardly covering it at all,” Gabbard replied.

“Like, hey, Paul Pelosi is doing these trades within this period of time of Nancy Pelosi voting on this bill or bringing a bill to the floor — because we’ve got to remember Nancy Pelosi as Speaker of the House, nothing happens without her knowing about it or giving her stamp of approval,” Gabbard said.

“So, regardless of whether it’s happening in the Judiciary Committee … if there’s a bill coming to the floor and there’s major legislation that’s being passed or is being squashed, that is happening with her say so,” Gabbard continued.

“And so, just in these last few days … once people started making noise, saying, ‘Hey, you as a member of Congress or your spouse or your adult child’ should not be allowed to conduct insider trading on issues that Congress is dealing with,” Gabbard added.

The former Democrat said politicians “can’t pretend anymore that they haven’t been doing it.”

She also said that even as Pelosi is saying on one hand that Congress will “draft legislation” to deal with it, Congress is about to take a break, and “once again, she’s refusing to bring the bill to the floor.”

Rogan said the “last thing” Pelosi wants to lose is the “honey pot.”

Both Rogan and Gabbard noted how Pelosi’s husband Paul’s stock record is better than the likes of Warren Buffett and George Soros.