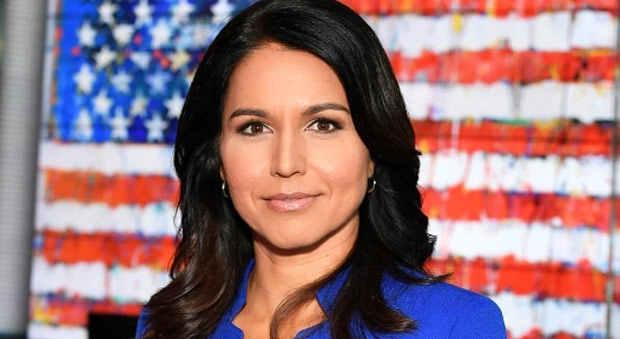 Pro-Trump Bolduc, who is challenging Democratic incumbent Maggie Hassan, revealed on Twitter he and Gabbard will “barnstorm the Granite State.”

“[Tulsi Gabbard] is a fellow change agent and independent-minded outsider willing to speak truth to power. I’m honored to have her support and looking forward to barnstorming NH with her!” Bolduc tweeted.

“We don’t agree on every issue, but I am honored to have the support of Tulsi Gabbard who shares my view that the status quo is broken and we need a change of direction,” he added.

The New Hampshire Democrat Party lashed out following the news, calling Tulsi a “Putin apologist who has pushed conspiracy theories.”

RELATED: Nancy Pelosi Claims Democrats Will Sweep Midterms: ‘We Will Hold the House’

“Tulsi Gabbard is a Vladimir Putin apologist who has pushed conspiracy theories and stood with dangerous tyrants over the United States,” the NHDP stated in a press release Wednesday.

“By campaigning with a pro-Putin, extreme conspiracy theorist like Gabbard, Don Bolduc is making only more clear how out of step he is with NH,” they added.

Gabbard discussed how more people are beginning to question who their elected officials are actually working for – the people or themselves.

“Like, hey, Paul Pelosi is doing these trades within this period of time of Nancy Pelosi voting on this bill or bringing a bill to the floor — because we’ve got to remember Nancy Pelosi as Speaker of the House, nothing happens without her knowing about it or giving her stamp of approval,” Gabbard said.