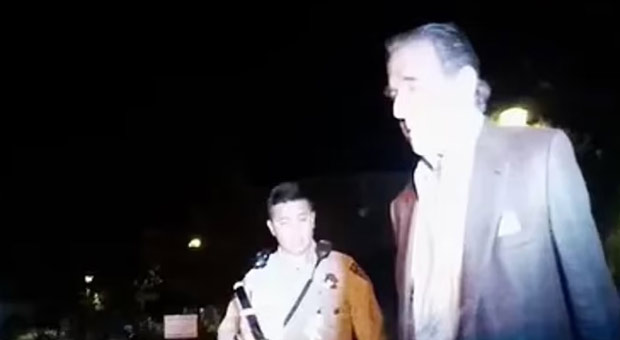 Democratic House Speaker Nancy Pelosi’s husband, Paul Pelosi, was captured by police bodycam footage “swaying” and barely able to walk, in the immediate aftermath of his drunken car crash in May.

Photos obtained by DailyMail.com shows Pelosi’s hands battered and bruised by the crash.

82-year-old Pelosi pleaded guilty on Tuesday to one count of DUI causing injury and another of driving with a .08% blood alcohol level or higher causing injury. He was sentenced to three years on probation, eight hours of a court-ordered work program, $1,900 in fines, $5,000 restitution, and a three-month drink driving course.

The House Speaker’s husband will have to have an interlock ignition device fitted to his car, preventing him from starting if it detects alcohol on his breath.

The complete California Highway Patrol investigative file includes injury photos as well as pictures of the scene, The Mail reports.

The details of the crash reports have now shed further light on the incident.

Paul Pelosi admitted to police he had consumed a glass of champagne and wine with a dinner of pork chops and salad but claimed he stopped drinking two hours before the crash.

But experts say an average person would need at least three drinks in an hour to reach an 08% blood alcohol level.

Pelosi was arrested on the side of the road in Yountville, California, and booked into jail after police found a blood alcohol content of 0.08. Police arrived to find Pelosi inside the crashed Porsche Carrera 4S, smelling of alcohol.

Pelosi said his car spun when hit by a white Jeep before losing control.

According to one witness, Pelosi’s Porsche “suddenly accelerated” into the path of the Jeep, saying the Porsche crossed “way too quickly.”

Perez said Pelosi appeared ‘unsteady’ on his feet when asked to walk a few steps to collect his insurance papers.

Officer Perez said Pelosi had to hold his shoulder for the walk to his patrol car for sobriety tests, where he was visibly swaying during a balance test.

“Throughout my conversation with Pelosi, I observed the following objective signs and symptoms of alcohol intoxication: both of his eyes were red/watery, his speech was slurred, he had a strong odor of an alcoholic beverage coming from his person, and he failed to provide logical answers to multiple questions I asked,” wrote Perez in his report.