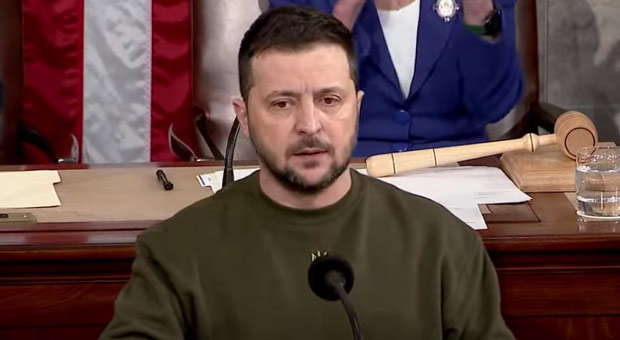 Carlson noted the absurdity of the appearance as the United States continues to suffer its own border woes after a pandemic-era federal immigration policy known as Title 42 expired.

Zelensky gave a speech to congress during which he made a plea for even more taxpayer money for yet another round of defensive weapons funding.

“The president of Ukraine arrived at the White House dressed like the manager of a strip club and demanding money, and amazingly no one threw him out,” Carlson said.

“Instead they did whatever he wanted and American taxpayers declared that Joe Biden will continue to give Zelensky whatever he demands for “As long as it takes,”‘ Carlson added.

Carlson also noted that disgraced FTX founder Sam Bankman-Fried had done something similar and compared the similarities of the Ukraine president’s attire.

“The media, Congress, the White House all love this weird little guy called Bankman-Fried. Remember that? We were reminded of that,” he said.

Carlson also questioned why specifics weren’t discussed between the two heads of state, including what would happen if ‘Zelensky wins’ the war against Russia.

“Biden never specified what ‘it’ is, and ‘as long as it takes’ to do, what?” Carlson said.

“Push the Russian Army back to pre-invasion borders? That sounds reasonable that’s what most Americans likely assume, those still paying attention.”

Carlson highlighted that more important issues should have been addressed during the visit.

‘What happens if he wins? What does the ensuing chaos look like? Who secures the largest arsenal of nuclear weapons? Strangely those questions didn’t come up today,” Carlson added.

“The point was to fawn over the Ukrainian strip club manager and hand him billions more dollars from our own crumbling economy,” Carlson said.

RELATED: Lindsey Graham: Putin’s Assassination is Only Way to End War in Ukraine

On Wednesday, Zelensky asked Biden for even more Patriot missiles.

“What is going to happen after the patriots are installed? After that, we will send another signal to President Biden that we would like to get more patriots,” Carlson said.

Zelensky, a former comedian, used the moment when the audience in the room laughed by saying, “We are in a war,” while shrugging his shoulders.

‘We’re working on it,’ Biden responded to the request.

Biden vowed to Zelensky that the U.S. ‘will stay with you’ against Vladimir Putin’s invasion.

Unsurprisingly, Biden appeared to be reading answers to questions about how he will hold the western alliance together against Russia.

Biden appeared to read off note cards when he said of the alliance, “We have never seen a major invasion of a European country since World War II.”

“And they see no signs that Putin is going to do anything to change that unless we resist and we help the Ukrainians resist. We all know what is at stake.”