Lindsey Graham: Putin’s Assassination is Only Way to End War in Ukraine 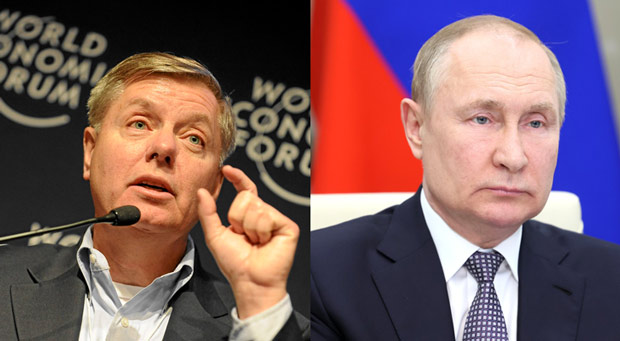 Graham said, “I would give him the ability to dislodge Russians from his country.:

“Right now, the Biden administration has done more – and I appreciate doing more, but not the offensive capability to dislodge the Russians from the east, particularly Crimea,” Graham added.

“So, the longer-range weapons would hurt the Russian military more effectively. The drones would be the biggest game changer.”

“How does this war end? When Russia breaks, and they take Putin out. Anything short of that, the war’s going to continue,” he said, seemingly fantasising about Putin’s assassination.

“To ask the Ukrainians to give Russia part of the country after all this death and destruction is not going to happen,” Graham added.

“To signal a ceasefire, Russia will take the opportunity to rearm and come at them again,” he said.

“So, we’re in it to win it, and the only way you’re going to win it is to break the Russian military and have somebody in Russia take Putin out to give the Russian people a new lease on life,” Graham concluded.

This is not the first time Graham has fantasied about Putin’s assassination.

Earlier this year, Graham said the goal in the ongoing Ukraine war should be to “take out” Putin.

RELATED: Zelensky Predicts ‘There Would Be No War’ If Putin Suddenly Dies

Not long after Russia began the invasion of Ukraine on February 24, Graham floated the idea of assassinating Putin while being interviewed by Fox News.

Graham later doubled down with his assassination fantasy on Twitter:

“Is there a Brutus in Russia? Is there a more successful Colonel Stauffenberg in the Russian military?” Graham asked at the time.

“The only way this ends is for somebody in Russia to take this guy out.’

In October, Graham attacked Tesla CEO Elon Musk for urging a de-escalation in the Russian War on Ukraine.

Musk tweeted about the possibilities of peace between Russia and Ukraine, which drew angry responses from officials, including Graham.

And if someone suggested that “assassination” would be the “only way” to get rid of RINOS? Or GROOMERS? They’d be the “bad guy” and have to answer to the FBI.

Missy, are you volunteering? And why a 15-20 year old pic of Missy?

Can someone shut this idiot fagala up ? Please

Kruschev was the only peacefully outed leader since 1917. Russia has never had a planned system of succession. The leading candidate to perform the task is the present leader of the Wagner Group who is tiring of Putin’s lack of strong leadership.