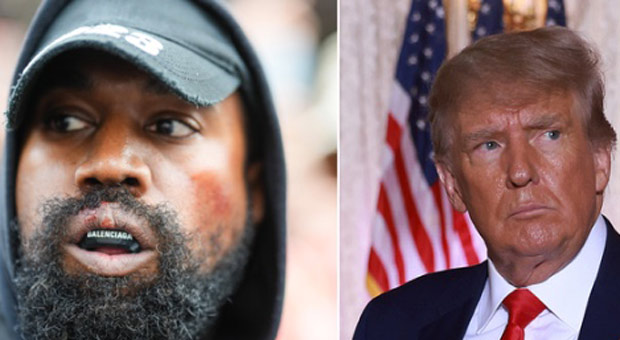 “So I help a seriously troubled man, who just happens to be black, Ye (Kanye West), who has been decimated in his business and virtually everything else, and who has always been good to me, by allowing his request for a meeting at Mar-a-Lago, alone, so that I can give him very much needed ‘advice,'” Trump wrote on TruthSocial.

West’s multiple antisemitic rants have prompted major companies to cut ties with their media and fashion sponsorships with the rapper.

Following the media firestorm after Trump’s meeting with West, the former President said he was unaware of who Fuentes was and knew nothing about his views.

“He shows up with 3 people, two of which I didn’t know, the other a political person who I haven’t seen in years,” he wrote, referring to West’s guests, which included former Trump aide Karen Giorno, who reportedly joined West’s campaign and was with Fuentes.

Trump also addressed West’s announcement that he would run for President in 2024.

“I told him don’t run for office, a total waste of time, can’t win,” Trump recalled.

West also claimed Trump was angry when he asked him to run with him as vice president.

“I think the thing that Trump was most perturbed about, me asking him to be my vice president,” West said. “I think that was like lower on the list of things that caught him off guard.”

West claimed that Trump was “basically screaming at me at the table, telling me I was going to lose.”

“I mean, has that ever worked for anyone in history?” He continued.

“I’m like, woah woah hold on hold on Trump, you’re talking to Ye.”

West needs psychotherapy and everyone needs to stop playing into his illness. He is going to end badly otherwise.

Let’s be honest…”Ye’s” recent ranting against Jews has quite little to do with the fact he’d NEVER win a presidential election! He STILL would have lost even if he’d never made the comments at all.