Trump Endorses Kevin McCarthy in the Wake of GOP Backlash 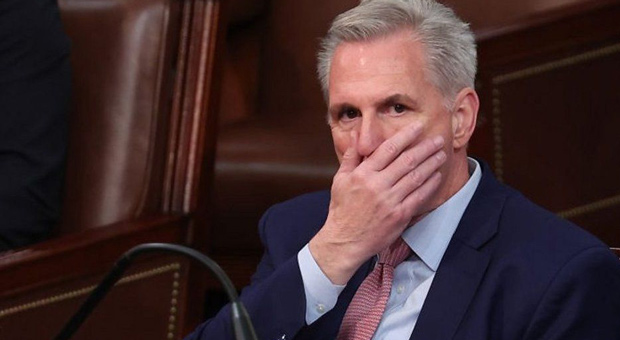 Former President Donald Trump has thrown his support behind Kevin McCarthy despite the former House Minority Leader failing to secure the votes needed to be Speaker.

Trump’s endorsement comes amid the surge in support for Jim Jordan for the Speaker of the House as McCarthy lost the second and third rounds of voting.

“Some really good conversations took place last night, and it’s now time for all of our GREAT Republican House Members to VOTE FOR KEVIN, CLOSE THE DEAL, TAKE THE VICTORY, & WATCH CRAZY NANCY PELOSI FLY BACK HOME TO A VERY BROKEN CALIFORNIA,THE ONLY SPEAKER IN U.S. HISTORY TO HAVE LOST THE “HOUSE” TWICE! REPUBLICANS, DO NOT TURN A GREAT TRIUMPH INTO A GIANT & EMBARRASSING DEFEAT. IT’S TIME TO CELEBRATE, YOU DESERVE IT. Kevin McCarthy will do a good job, and maybe even a GREAT JOB – JUST WATCH!” Trump wrote on Truth Social.

Meanwhile, Florida Representative Matt Gaetz quetsioned the legality of McCarthy moving into the House speaker’s office a day before failing to secure the votes needed for the position.

McCarthy fell short of the 218 votes required to be elected Speaker on Tuesday as 20 GOP House members backed Jim Jordan of Ohio instead.

Gaetz posted a letter on his Twitter account Tuesday night addressed to Architect of the Capitol Brett Blanton, asking on what “basis in law” is McCarthy permitted to occupy the House.

RELATED: Liz Cheney Leaves Congress Millions of Dollars Richer Than When She Entered

“What is the basis in law, House rule, or precedent to allow someone who has placed second in three successive speaker elections to occupy the Speaker of the House Office?” read the letter. “How long will he remain there before he is considered a squatter?”

Earlier this week, McCarthy was accused of being part of the “swamp cartel” after nine Republicans signed a letter saying his efforts to woo conservative Republicans were too little, too late.

“[T]he times call for radical departure from the status quo — not a continuation of past, and ongoing, Republican failures,” the letter said.