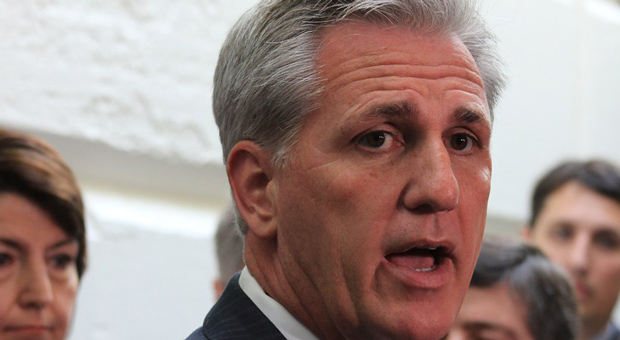 Kevin McCarthy is facing trouble with just 24 hours to convince more than a dozen Republicans to vote for him as Speaker with one dissenter calling him a member of the “swamp cartel.“

McCarthy needs 218 votes to secure his role as Speaker, meaning he could only afford to lose the support of four Republicans.

On Sunday, a total of nine Republicans signed a letter saying that McCarthy’s efforts to woo conservative Republicans were too little, too late.

“[T]he times call for radical departure from the status quo — not a continuation of past, and ongoing, Republican failures,” the letter said.

On Monday, Representative Bob Good told Fox & Friends that McCarthy is “part of the problem, not the solution.”

“There is nothing that indicates to me that he is going to change his pattern since he has been in leadership where he is part of the swamp cartel,” the Virginia Republican said.

“He is the reason on the Republican side why we pass massive omnibus spending bills that just got rammed down our throats by Republicans in the Senate. He was part of that in leadership.”

Meanwhile, Rep. Matt Gaetz said he won’t be voting for Kevin McCarthy for Speaker because he’s “just a shill of The Establishment.”

Could we get Gov Desantos?

One fact is that McCarthy is the second Boehner protegee to become GOP leader since Boehner got the boot. He is far from impressive.

The second fact is you often don’t get the person that you either like the best, or you think would be the best Speaker.

The third fact is that none of these nay-saying Goopers can offer up an alternative candidate that can come up with the votes necessary to win – just as McCarthy also can not. They’re offerings get even less of the vote.

Here’s the bitter reality: if they can’t put up a better candidate that can win while depending only on Republican votes, the result will be a Speaker put in the chair by promises and concessions made to the Soviet Democrats to get the votes needed for the majority necessary.

How that is going to be better for America than McCarthy, then somebody should ask Gaetz and the rest how that works. Keep this up and the Soviet Democrats will find one of their own, “a moderate” to put up for speaker. That person will get 100% of the Soviet Democrats’ votes, and the necessary extra votes from “moderate” Republicans to have another Soviet Democrat as House Speaker.

Bill Gates Claims Confronted over Flying on Private Jets, Claims He's 'Not Part of the Problem'
Microsoft founder Bill Gates has claimed his climate change activism does not conflict with his usage...
No posts found
wpDiscuz
2
0
What are your thoughts? Click to commentx
()
x
| Reply