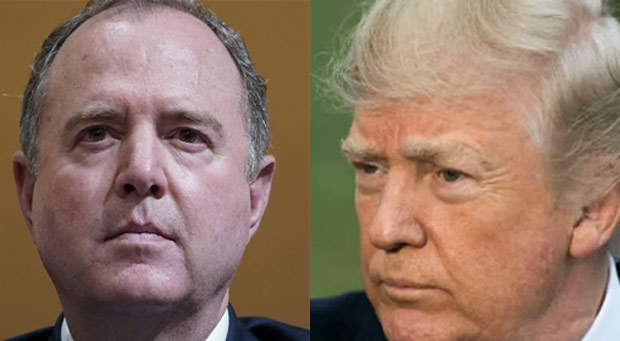 Former president Donald Trump is calling for Democratic representative Adam Schiff to be prosecuted after recent Twitter files showed him using his influence to silence journalists on social media.

Journalist Matt Taibbi reported that Twitter was accepting requests “from all over: from Treasury, the NSA, virtually every state, the HHS, from the FBI and DHS, and more.”

“They also received an astonishing variety of requests from officials asking for individuals they didn’t like to be banned. Here, the office for Democrat and House Intel Committee chief Adam Schiff asks Twitter to ban journalist Paul Sperry,” Taibbi added.

Below is a copy of the email:

Trump described Schiff as a “sleazebag and traitor” and called for the Democrat to be prosecuted.

“Schiff is a sleazebag and traitor, and should be prosecuted for the damage he has done to our Country!” Trump said.

“Elon Musk calls himself a free speech absolutist, to justify turning a blind eye to hatred and bigotry on Twitter. But when journalists report unfavorable news, they are banned without warning. The devotion to free speech is apparently not that absolute. But the hypocrisy is,” Schiff wrote.

“Thankfully, you lose your chairmanship very soon,” Musk shot back, adding, “Your brain is too small.”

Earlier on Tuesday, Kevin McCarthy confirmed that Schiff would not be serving on the committees as he prepares for their removal.

“Those two won’t be on intel,” McCarthy said, referring to Schiff and Eric Swalwell.

Thank you President Trump, Elan Musk and all the great MAGA s who are fighting the good fight for All America.

Tomato, tomahto. Spellcheck may have spelled that for him; it screws me up more than it makes valid corrections.

the first sign of a mental illness are double standards…
[in greta voice] “how dare you” question the ministry of truth?… all i see nonstop is the gaslighting by the media, it’s what banana republics do… in the book “1984” the fascist/commie democrat – rino – uniparty playbook, big brother is now supplanted by the big brother[s] ministry of truth – giggle, fascistbook, shitter, boobtube, wokeipedia, snoopys & the msm etc…

schiff has hit the fan!

It’s called treason, and he should be tried for that, as should be all the Bidens, Barack Obama and Hillary Clinton. Just for starters.

WHY hasn’t the criminal Schiff been EXPELLED from Congress already? Schiff is evil and so are the low IQ morons that voted for the idiot Schiff. Shame on Orange County, CA!

Musk may have blow $40 billion on the bankrupt (financially and morally) Twitter. But the return on investment for what the released documents show (a complete paper trail of corruption and constitution violations) will MORE than make up for that.
Don’t trust his trans-humanist a**e for a moment, but I can certainly appreciate how much FUN he’s having hoisting the left up with their own petard. And will say “thank you” just as soon as the criminals (too long a list for this comment) begin to spend decades in prison for their crimes against the people of this nation and against humanity.

I’m just a kid from Long Island but , what happened to the right wing? Can you believe that they would have been this complacent in any other decade? Would the “Greatest Generation” have stood for all this homosexual, trans filth to be unleashed on OUR CHILDREN????

You’re going to COURT? To see a Soros sponsored LOON who will tell you that “drag queens are an essential business during a pandemic and churches were not?” That’s the “justice” you’re letting “play out”??? #Sad